At right, found by Milan Town Historian and DCHS VP for Milan, Vicky LoBrutto, in a scrapbook is an undated clipping. We have not found a copy online, so the exact date and publication are unknown. In the style of a legal mind, Gaius Bolin writes with a point of view that is well informed andÂ  grounded in the foundational values of the United States.

Bolin wrote a striking letter to the editor as WWI was ending. Among the 380,000 returning Black veterans from the “World War” who had fought to make the world safe for democracy, were highly decorated veterans like the “Harlem Hellfighters” or 369th Infantry. The war was being wound down. But the reception of these veterans was a reception of violence. The summer of 1919 came to be known as the “Red Summer” as a result. Poughkeepsie’s Gaius Bolin broke through many barriers with many firsts. He was the first Black to graduate from Williams College, the first to practice law in the county, the first to be President of the County Bar Association. His father was born in Dover Plains. His daughter, Jane Bolin, became the first African American female Judge in the United States in 1939. In August of 1919 he wrote about a powerful letter in response to a Poughkeepsie newspaper editorial. 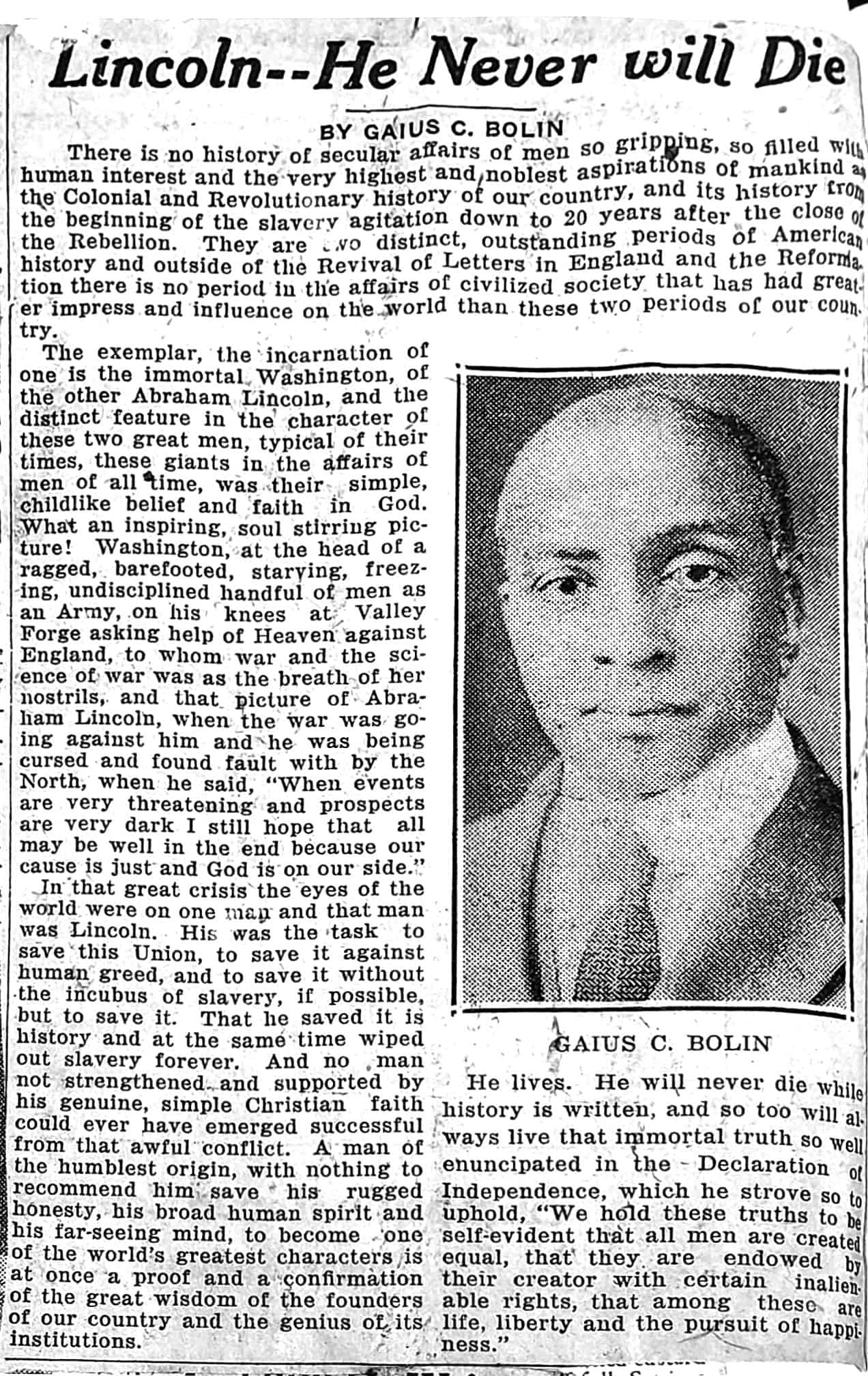 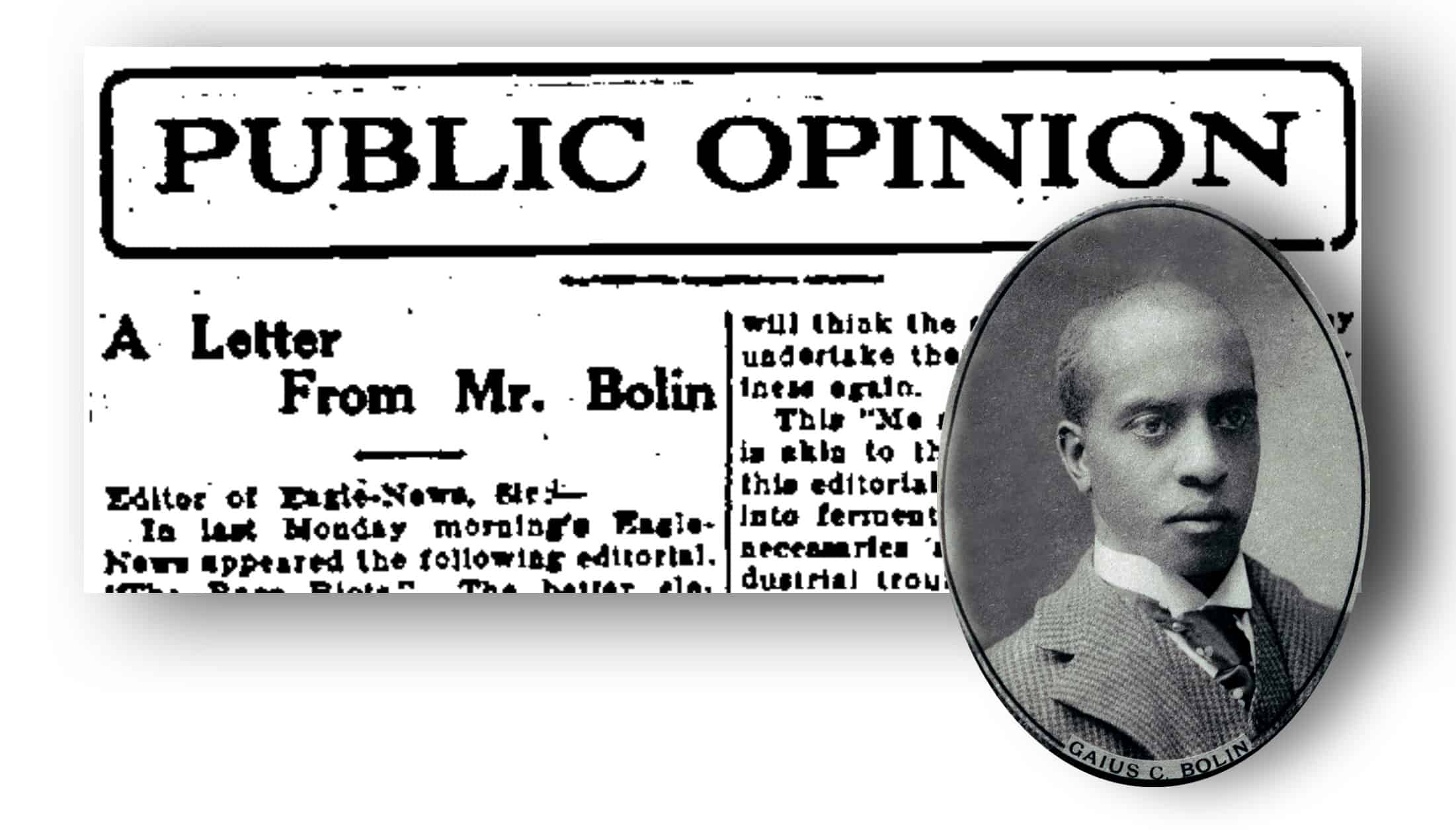 Editor of the Eagle News, sir,

â€œThe better elements of different races never have trouble and getting along with each other. Industrious and peace-loving and fair-minded people can always reach some basis of adjustment by which they can live harmoniously side by side.â€

â€œThe Ruffians who provoke such rash outbreaks as those recently occurring at Chicago and Washington must be made to feel that the country will not tolerate such disturbances. It will be necessary to land a lot of them safely in jail for long terms to teach their friends and imitators that for their own health they must keep the peace.â€

â€œWherever there is serious friction between whites and Negroes the sane and sensible leaders of both must get together to remove the causes. The white people must give the Negro an opportunity for education and development. The Negro must realize that until they become just as good citizens as useful and moral and intelligent as the white race they must expect some degree of social discrimination.â€

Whoever wrote the editorial, if he had only known when to stop, he would have not betrayed his real, genuine feelings and attitudes in matters of this kind. A weak, milk and water composition at best, the end of it shows not only a narrowness of the mind and the lack of comprehension of the meaning of American citizenship, but it discloses a prejudice which will become the newspaper that the broad-minded, fearless stalwart John I Platt edited for so many years with such signal ability and success, and which under the guidance of his powerful mind and pen did such yeoman service in this Hudson River Valley prior to and during the Civil War, and in the settlement of the national questions in the reconstruction period after the war and up to the very time of his lamented death.

The end of this editorial says the Negroes must realize that until they become just as good citizens as useful and moral and intelligent as the white race they must expect some degree of social discrimination.

What a wonderful thing it must be to belong to a race of people, every single member of which is a good citizen, a useful citizen, a moral Citizen and an intelligent citizen, and how nice it must seem to sit down in that halo of goodness, usefulness, morality and great intelligence and take a pen and tell other citizens who do not belong to that race that although they are bearing all the responsibilities and burdens of citizenship, the same as everybody else, still they have no right to expect to enjoy their full rights as a citizen until every one of them becomes as good and useful and moral as those people say they are. Who is going to be the judge?

A person is a poor judge on any question of difference or any contest between himself and somebody else. His judgement and decision is apt to be a trifle warped and certainly not in favor of the other party to the controversy.

The person the same as a race, who sets himself up on a pedestal as a model of morality and virtue is disgusting. After all the silly talk, human nature is the same the world over, and the old colored woman who was being taken into an episcopal church had it about right when the minister, in the course of the induction, asked her among other questions about her belief in human nature when she shook her head and answered, â€œHuman naturâ€™? Human naturâ€™ are nasty stuff.â€

I never knew before that it is necessary for an American citizen to prove to somebody that he is as good and as useful and as moral and as intelligent as somebody else before he could enjoy his rights as a citizen. The colored people of this country never have and never will realize that until they become just as good and just as moral as somebody else says he is, that they must expect some degree of social discrimination. They are citizens of this country; they bear their full share of the burden of citizenship even to giving their lives freely and gladly in its defense, and every right that is due these other citizens who may say they are all virtuous and moral and intelligent, is due them.

Despite this fool talk about morality and intelligence, the events of the past five years have aroused in colored people a grim determination to have their rights as citizens in this country. They have been on their knees for 200 years pleading for their rights as men and citizens, but now they are standing up face-to-face with this question and they will no longer be denied by any fool talk about morality and virtue.

If the people of this country can afford to send the flower of its manhood, the finest men in all the world, to foreign countries to fight and suffer and die that the people of those countries should enjoy their rights unhindered and unafraid of any bully who held that same full notion that virtue and intelligence and everything that was worthwhile was synonymous with his name and his people, they can afford to see to it that American citizenship means American citizenship, and that it means it without any kind of reservation or winking of the eye with reference to anyone who is entitled to that citizenship.

Men who have made a careful investigation of the disgraceful trouble in Washington and Chicago say that the foundation and start of it was the newspapers which printed just such rot as your editorial in question ends up with, which put the notion into the heads of white loafers and rowdies that their colored fellow citizens were their legitimate prey, but from all reports from persons who were on the [?] in both instances they got a stomach full of rioting and they undertake that kind of cowardly business again.

This â€œMe and [?]â€ business which is akin to the virtue and morality in this editorial has got the whole world in ferment. The terrible prices for [necessities?] and almost universal industrial troubles have got the people of this country on edge fast approaching the danger point, and instead of foolish talk about virtue and morality or their lack, tending to the inflame and arouse angry, bitter, and resentful feeling, people who edit papers should try to use their brains and not their prejudices and try to help straighten out this terrible muddle this war has got us into, and to get things normal again and the people quieted.

The great bulk of the American people of all origins are fair and decent at heart, and if everybody will heed the lesson pictured to the world by the crazy, unbearable arrogance and haughtiness of the German Kaiser and his people, and its sad, sad results to the German people, we will get out of this mess after a while and when we do, and things begin to settle down again, when menâ€™s [?] once more are peaceable, there is going to be a better feeling and understanding in this country on all sides, and a lot of class, religious and racial feeling which is all too silly and foolish is going to disappear, and if the newspapers want to help to reach that period, they do not want to publish any more editorials like the one in question. 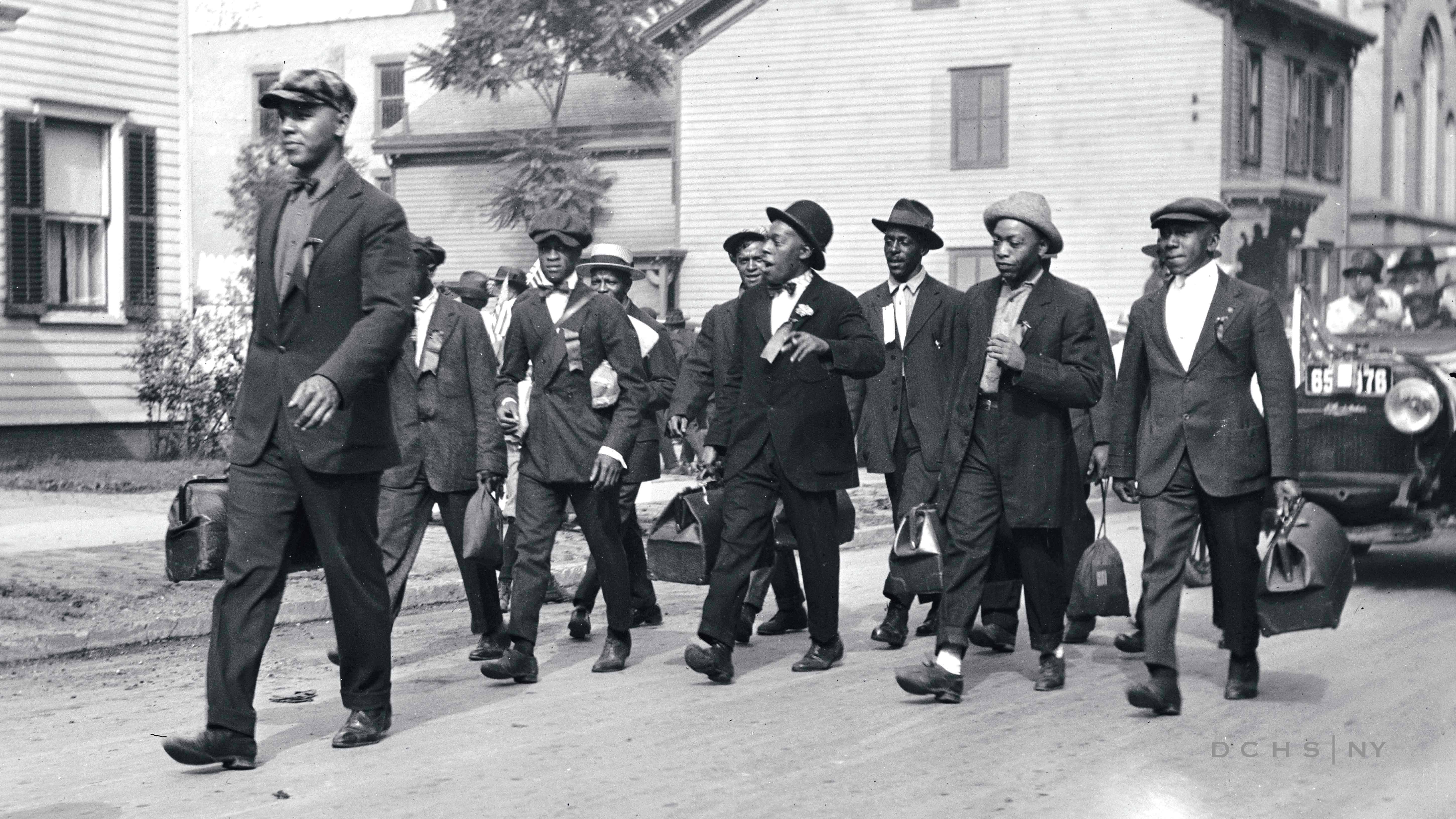 George Gould can be seen in the photo above, he is the second fully-visible person in from the left. His reflections, 60 years later, are below. 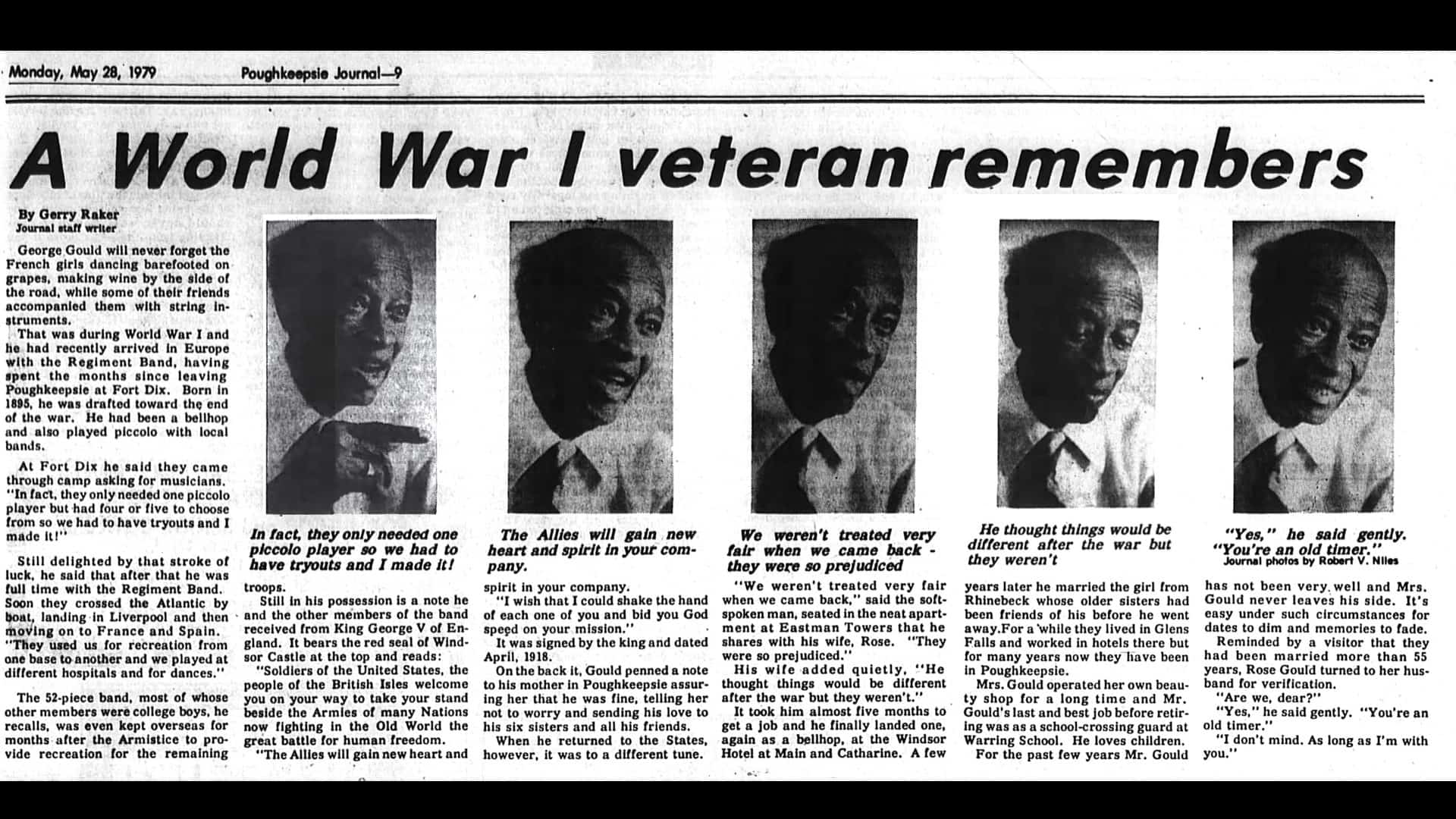 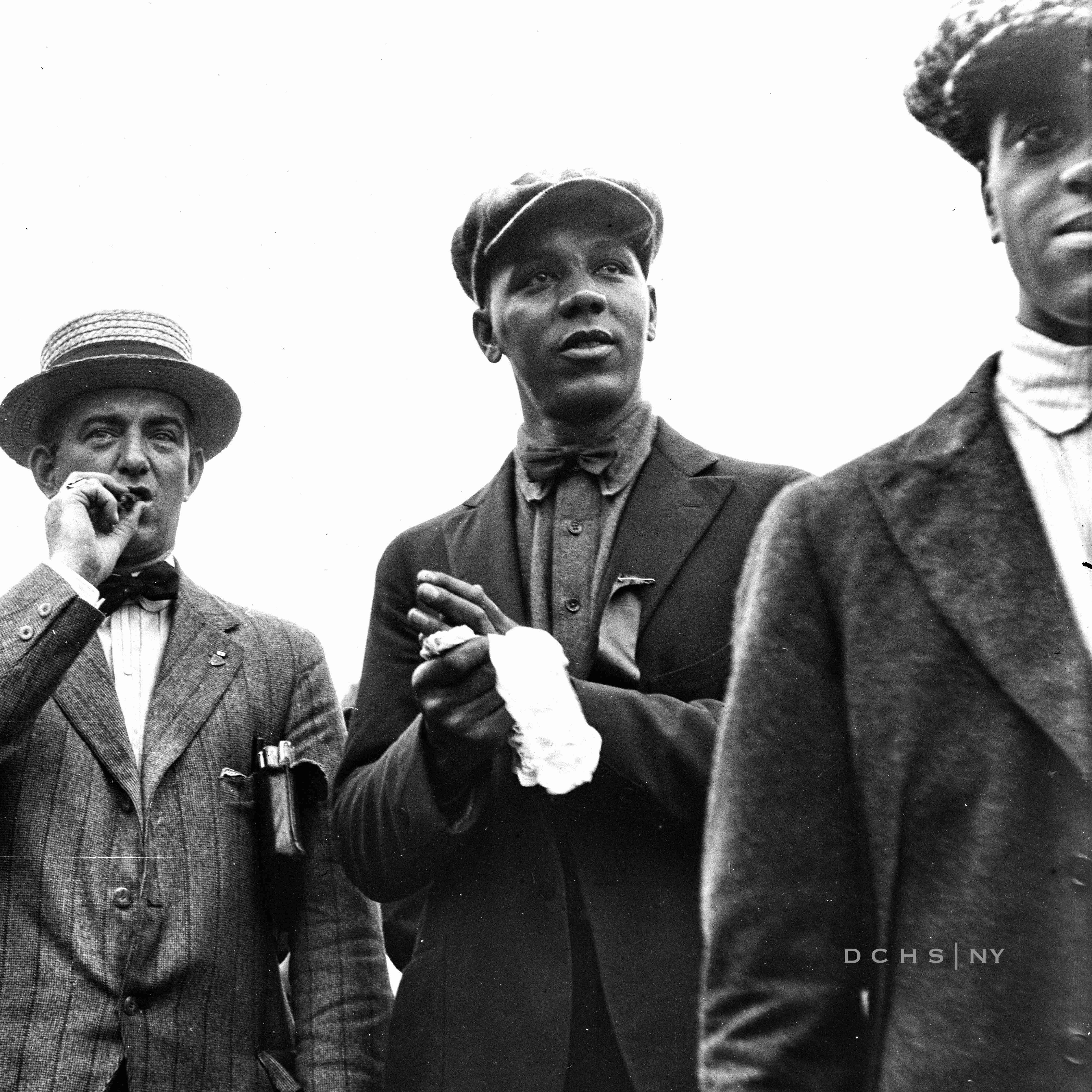