A version of this article appeared in the December 1, 2021 issue of the Northern/Southern Dutchess News / Beacon Free Press.

Arguably no family has had a greater historical presence, one that is pervasive, persistent, and woven into the community, than the Van Kleeck family. DCHS is fortunate to have been entrusted with many photographs, documents and objects from the family over generations. Van Kleeck family members remain active with DCHS today, supporting efforts like the broader sharing of the Van Kleeck photo collection that we expand on later.

The family name reminds us that Henry Hudson sailed on behalf of the Dutch in 1609, and it was the Dutch who were the first Europeans to settle along today’s Hudson River, doing so under the colonial name of New Netherlands. Unlike Virginia, or the appropriately named New England, the first European settlers were not English. Even though Dutchess County did not start to see significant settlement until the mid 1700s, well into English rule, the Dutch imprint remains tangible.

One of the oldest items (and probably the heaviest item) in DCHS Collections is a stone lintel dated 1702 (see photo). Inscribed with the initials of husband and wife Baltus and Tryntie Van Kleeck, itÂ  is from the first significant stone house built in Poughkeepsie on what is today Mill Street near Vassar Street. The house is memorialized by the iconic 1834 sketch done by the local historian with a national reputation, Benson Lossing, just prior to its demolition.

It was on June 9, 1687 that Baltus Barents Van Kleeck signed a lease from the land patent owners Robert Sanders and Myndert Harmense. It is that date that is celebrated as the mark of the beginning of European settlement of Poughkeepsie. By 1702 he owned property and was building a substantial house.

Local historian Benson Lossing created this sketch of the 1702 Van Kleeck House on Mill Street (near Vassar Street), Poughkeepsie, in the years just prior to its demolition in 1834. The inset shows a recent photograph of the stone lintel that was over the door of what was the first stone house built locally. In addition to the date of construction, you can see the initials of the husband and wife builder/owners: Baltus Van Kleeck and Tryntie Van Kleeck. The “V” is artfully entwined with the “K” and “T.” The lintel was a gift, among many photographs and documents over the years, entrusted to the Dutchess County Historical Society by the Van Kleeck family.

Under that lintel passed the notable and notorious of that period. Given its scale, and security, it was the meeting place of important councils planning the Revolutionary War. But sometimes it was used as a holding cell, as is reportedly the case of the radical Shaker, Mother Ann Lee (1736 to 1784). LeeÂ  was spreading what was seen as dangerous pacifism, urging young men not to take up arms in the Revolutionary War and cause of independence from Great Britain. She was imprisoned in the home in 1780. But during her six months of captivity, she created such a public sensation that it was determined that it would be better to let her go, than to allow her to gain the public attention she did by being a prisoner.

The 1692 scene of a six-year-old Johannes Van Kleeck and his friend of the same age can be seen depicted in the 1940 mural by Norman Foster in the Poughkeepsie Post Office. If you look up and to the right as you enter, you will see the depiction of two children approaching Native People at a spring near today’s Poughkeepsie Rural Cemetery. The story the mural depicts is based on sworn testimony by a much older Johannes Van Kleeck later in life, when he testified in court about boundary disputes. In her 1924 landmark book, “Poughkeepsie, the Origin and Meaning of the Word,” Helen Wilkinson Reynolds recounts the sworn testimony and uses it among a set of other original source material to convincingly make the case that this was the origin of Poughkeepsie as a name. Prior to that, it was commonly felt that it meant or referred to “safe harbor.” 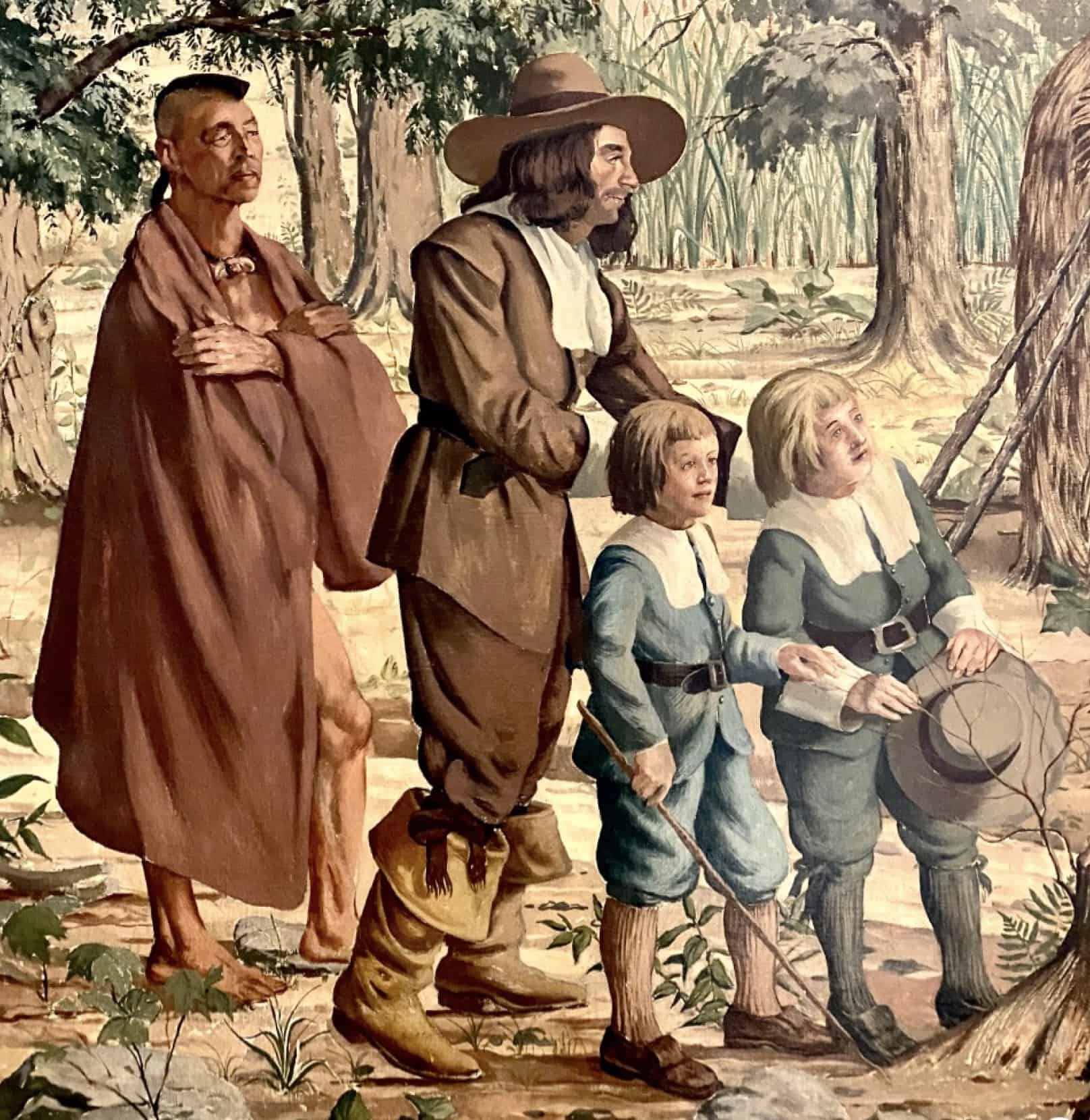 If you walk into the Poughkeepsie Post Office today, and look up and to the right, you will see this 1940 depiction by Norman Foster of the young boy, Johannes Van Kleeck, and a friend, at the spring used by Native Peoples as a resting place. Native People referred to the spring and resting place in words that to Dutch ears sounded like Poughkeepsie, and thus the name remains today.

The 1799 to 1960 family hat business on Main Street would in and of itself be of historic importance. But in addition to operating the store over generations, we are very fortunate that during that period, the Van Kleeck family, in particular Frank and Baltus B. Van Kleeck in the past, and Peter Van Kleeck today, were (and are) careful stewards of images of the transformation of Main Street from ox carts and horses, to horse-drawn trolleys, to the automobile.

DCHS has published a set of notecards with images from this collection, among which is the earliest known photograph of Poughkeepsie, dated 1850. Likely originally a daguerreotype by the renowned S.L. Walker (whose gallery sign is visible in the left of the photo), then copied to the more traditional style of a paper print mounted on cardboard, the photograph shows a group of men, some in the classic tall hats of the time, standing on the south side of Main Street, east of Liberty Street.Â  We have to remind ourselves that when the photo was taken there had been no Civil War, and John Adams and Thomas Jefferson had died just two and a half decades earlier. The new invention, the first railroad, had only just come as far as Poughkeepsie from New York City in the prior 12 months.

The Van Kleeck family business owners and operators were always conscious of, and protective of, local history. Whether it is events like the 1909 Hudson/Fulton Celebration, or regular holiday sales promotions, the store window often told the story of local and family history through the photographs that now make up the DCHS Van Kleeck Collection.

As a trial, DCHS is making a sample of these note cards available with paid membership or donation at www.dchsny.org/short . 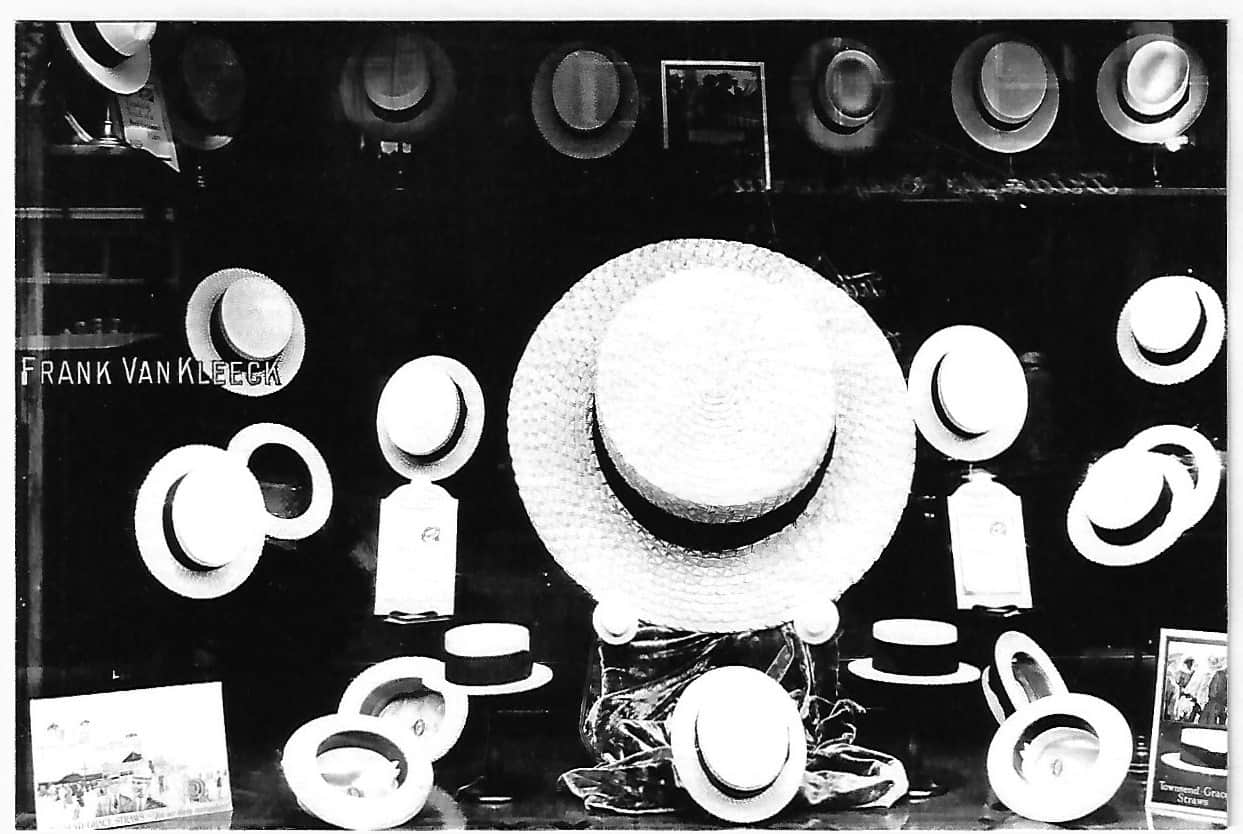 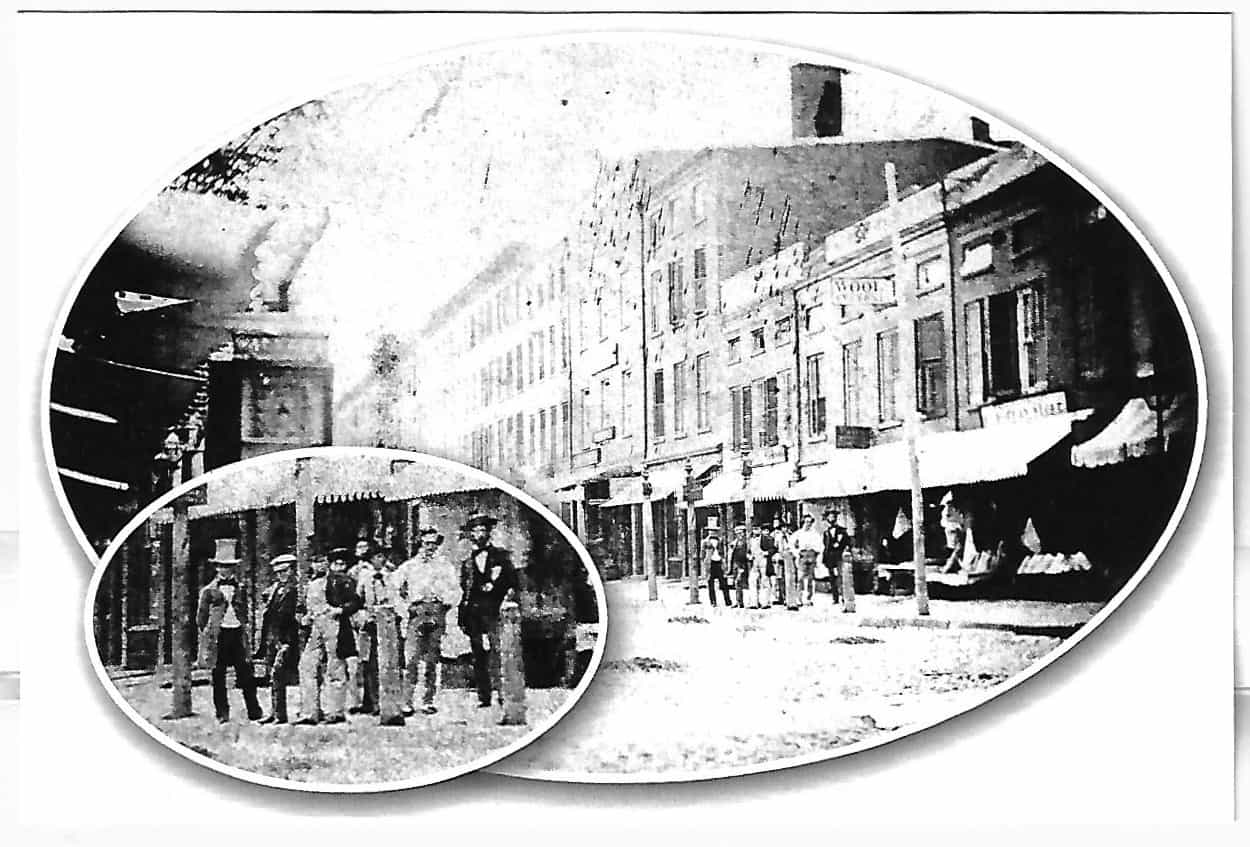 These are two images of newly created, small printed notecards that show (top) the 1924 storefront window and the name Frank Van Kleeck, a family business on Main Street, Poughkeepsie, from 1799 to 1960. At bottom: the earliest known photograph of Poughkeepsie, dated 1850, showing Main Street east of Liberty Street. Both photos are from the DCHS Frank and Baltus B. Van Kleeck Collection

Posted in Decoding Dutchess Past