A version of this article appears in the October 21, 2020 issue of the Northern/Southern Dutchess News / Beacon Free Press. See bottom of this page.

Perhaps no better example exists of the ability of political intent to guide the artistic hand when it comes to works of art than comparing Robert Walter Weirâ€™s 1835 painting with his painting of the same topic in 1838: The arrival of the Dutch and the iterests of the Dutch East India Company. 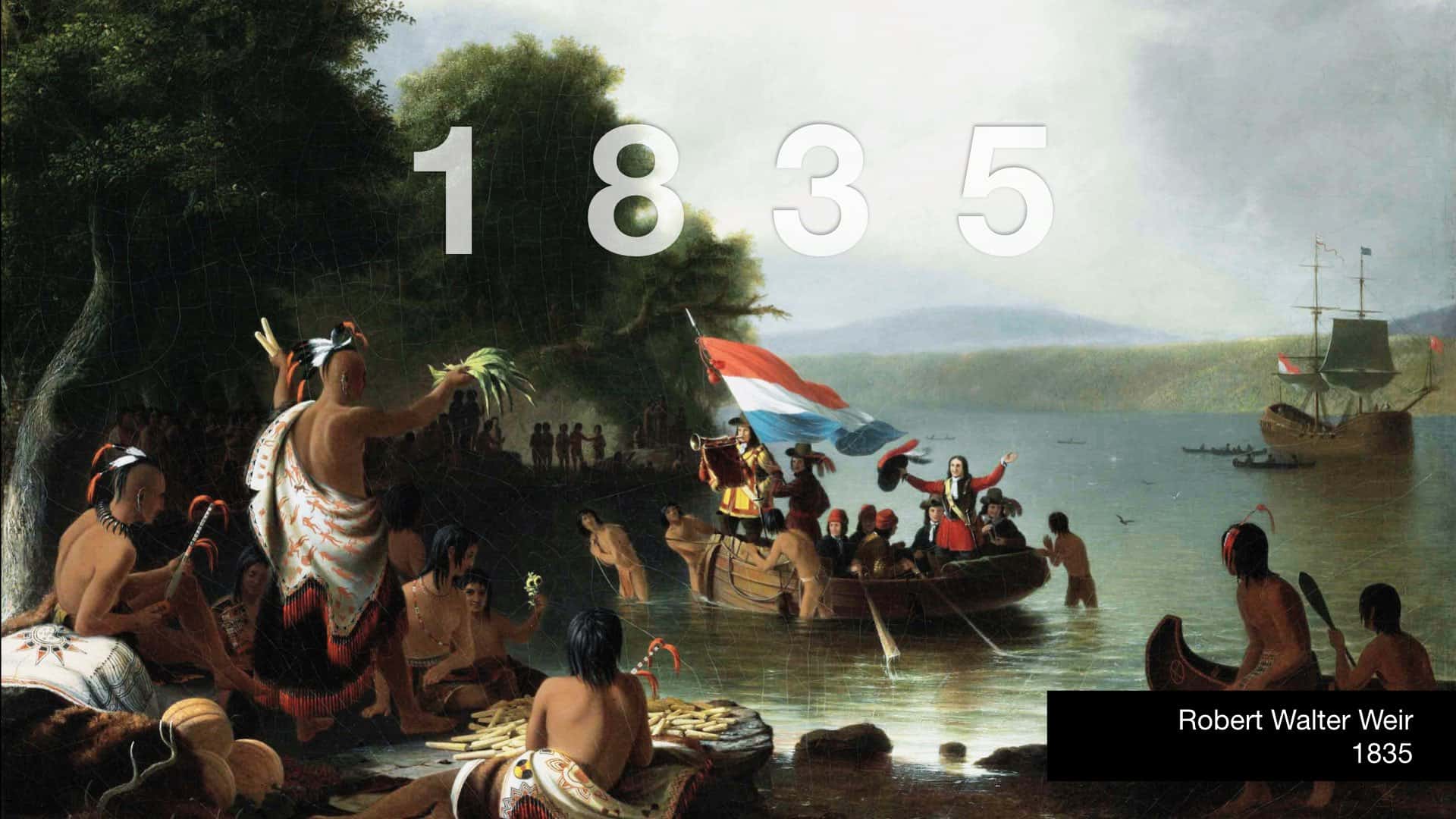 Above: In 1835, the artist Robert Weir painted the arrival of Henry Hudson at Verplanckâ€™s Point specifically for Congressman Gulian Verplanck, who was of Dutch heritage, and whose ancestorâ€™s owned the point depicted. 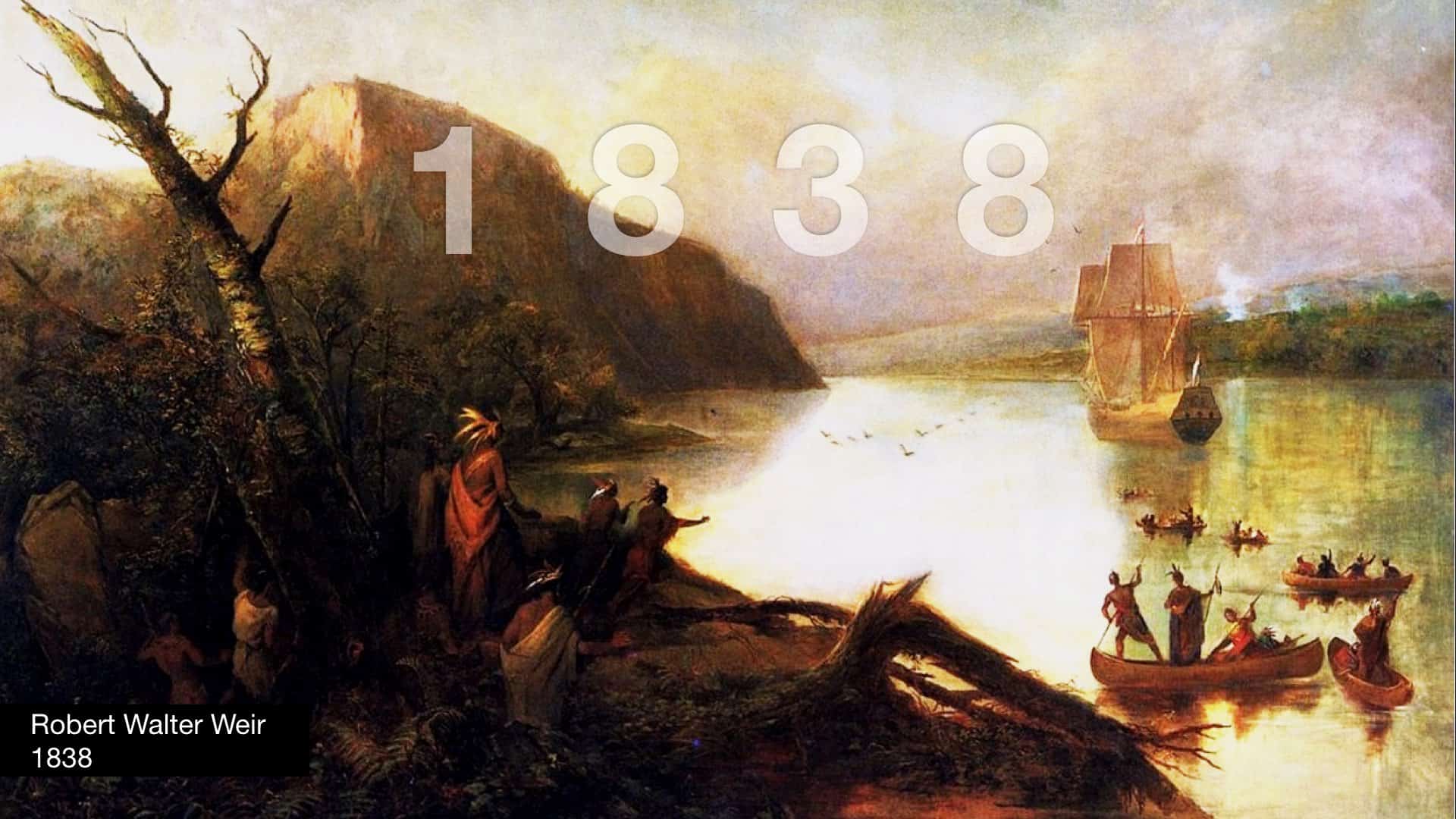 Above: A few years into his tenure as head teacher of painting at West Point Military Academy, Robert Weir depicted the same scene of Hudsonâ€™s arrival with a far more brooding and menacing tone. By 1838 the Seminole Indian War escalated as native people in Florida refused to be forcibly relocated to the west by the US military.

In the 1830s, Gulian Crommelin Verplanck (1786-1870) of Fishkill and New York City, was not only a US Congressman, he was chairman of the House Committee on Public Buildings and oversaw artist commissions for public art in the US Capitol Building.

Verplanckâ€™s ancestral family included the Van Cortlandts, who collectively owned swaths of land from Westchester to Dutchess County. The Verplanck family home is known as Mount Gulian in Fishkill and still stands and is open to the public (www.mountgulian.org).

In 1835, executed to flatter the taste of Verplanck, the aspiring artist Robert Walter Weir not only painted the arrival of the representatives of the Dutch East India Company, but depicted them landing specifically on family land, Verplanckâ€™s Point, in Westchester County. The scene is one of joy. The land is lush. The native population is robust, energetic and equal in scale and physical stature. 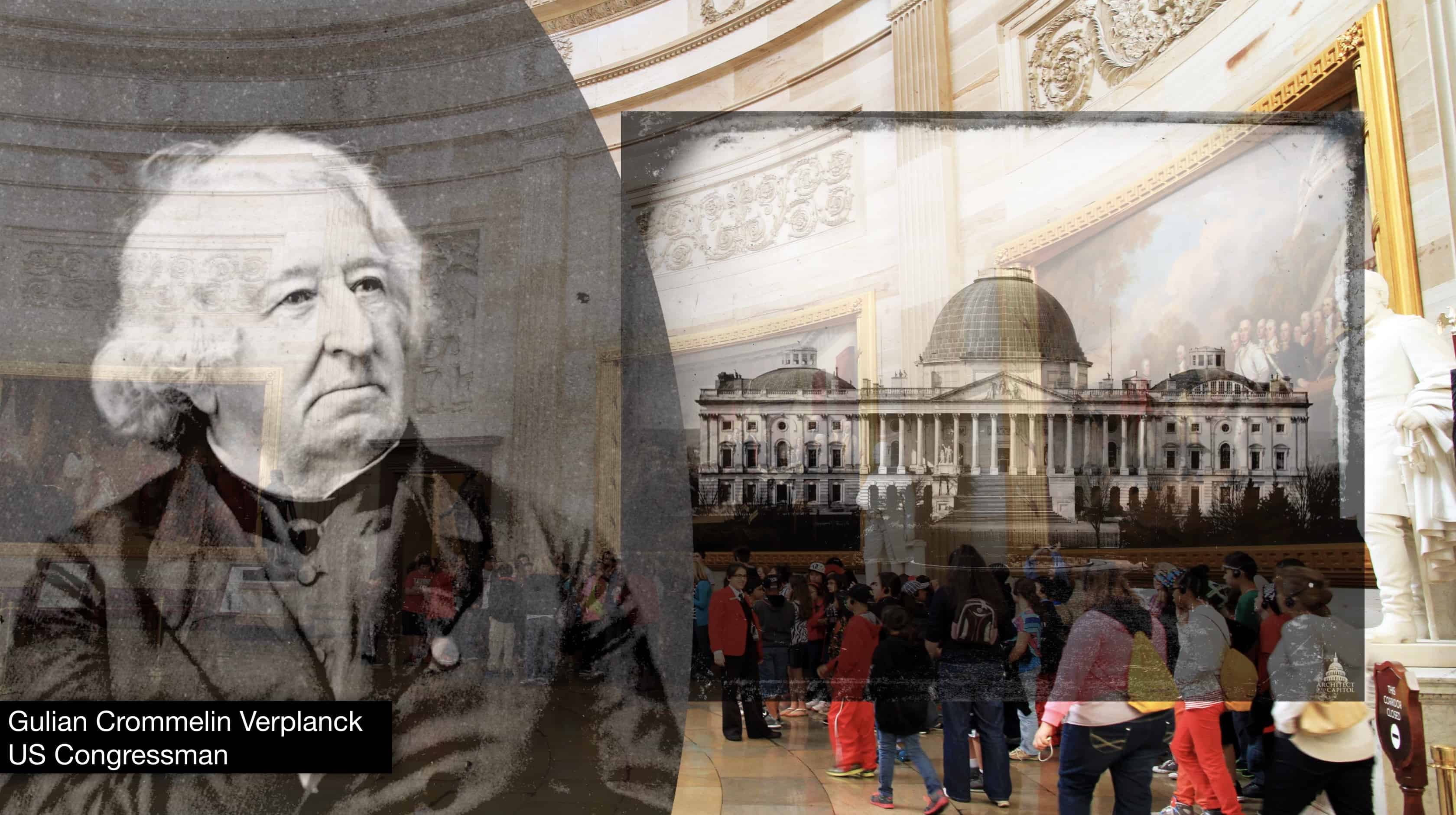 Weir had just been appointed teacher of art at West Point Military Academy. With an eye on being elevated to Professor (which he achieved in 1846), and no doubt from the experience of working directly with men who were going off to escalating wars with native people in Florida, the tone changed dramatically. Known as the Seminole Wars, the US military was enforcing the Indian Removal Act of 1830, which as the name suggests, was designed to forcibly remove native people westward.

In the 1838 painting, from the same artist, the land is barren and unfruitful. The native people are small in scale and recessive in their presence. A burnt orange color creates a feeling of foreboding.

The lobbying and sensitivity to national political winds seemed to work. Weir got a commission to paint for the US Capitol in 1843. It is not of Hudson’s arrival, but the subject matter was less important to him.

Weir had set the mold. The two approaches, one that his happy for all, one that is more foreboding, became replicated forever after.

Chosen for US Capitol Building, 1872 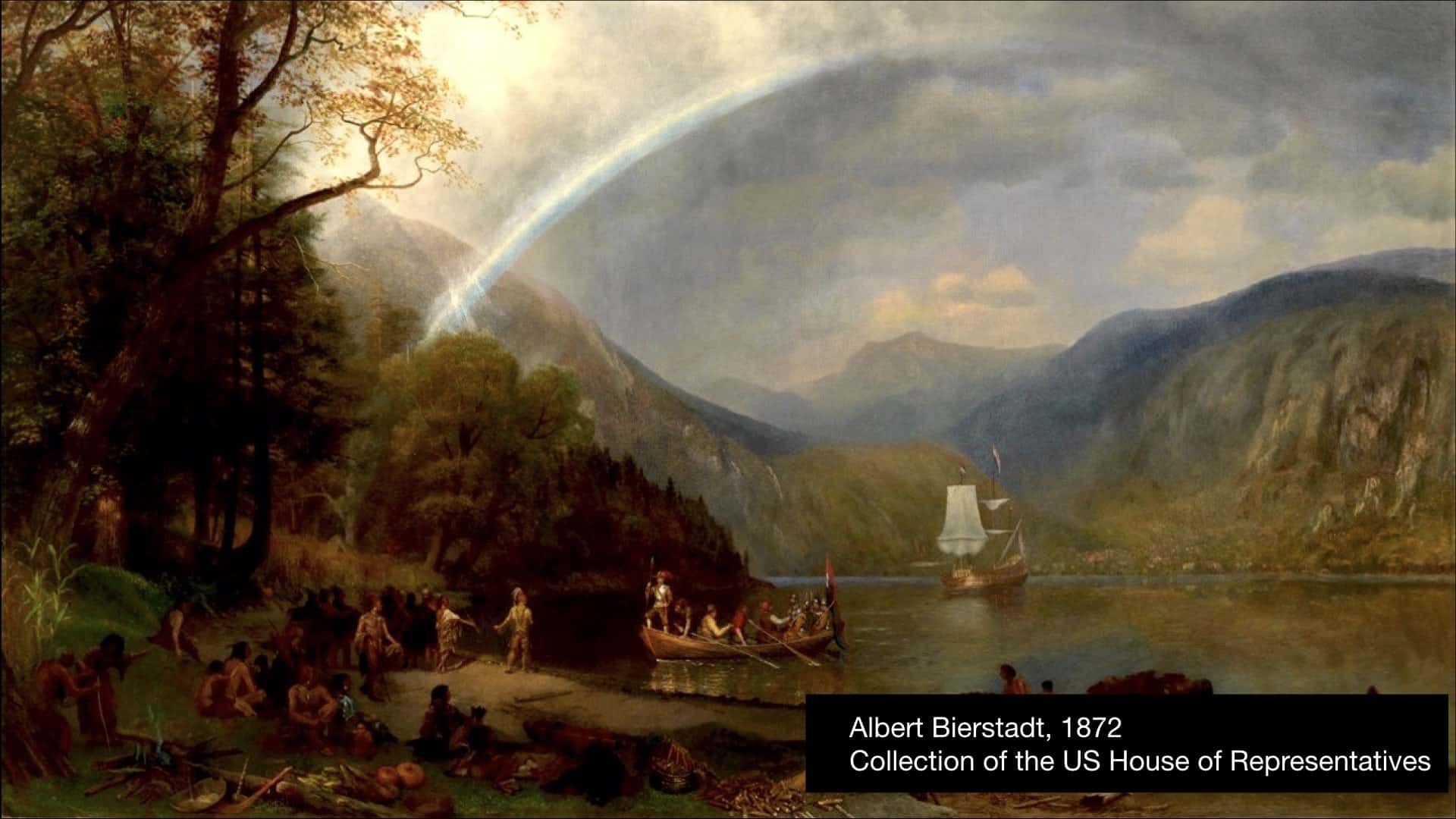 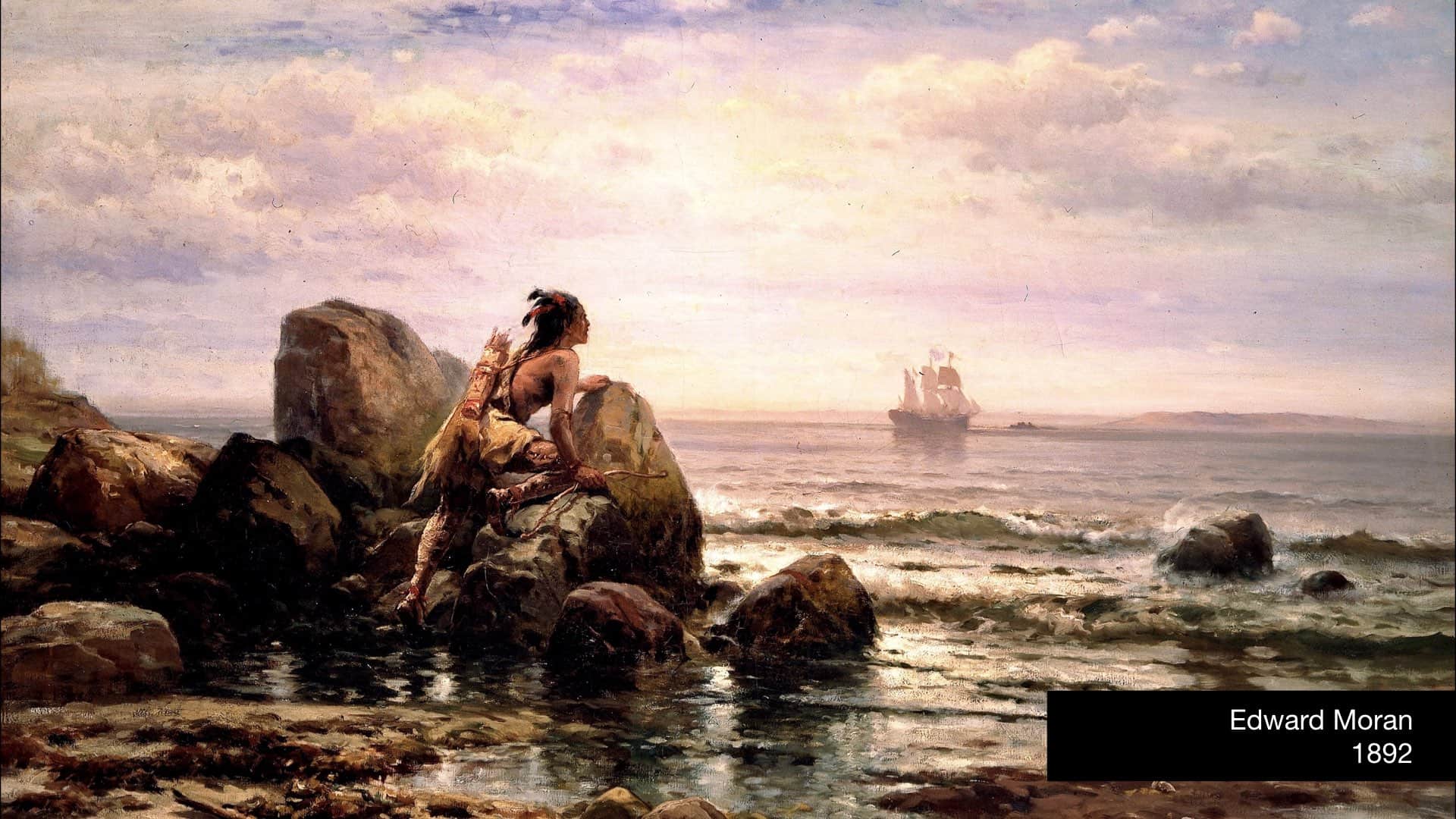 The first depiction of Hudsonâ€™s arrival in the US Capitol Building was by Albert Bierstadt in 1872, (above left). He painted a very optimistic scene, reminiscent of Weirâ€™s 1835 version.

In 1892, Edward Moran painted a more ambivalent and foreboding picture (above right), in the manner of the 1838 version. Now in the Collections of the Berkshire Museum, perhaps to be clear his painting is original relative to Weirâ€™s, the formal title of Moranâ€™s painting is â€œHenrik Hudson Entering New York Harbor, September 11, 1609.â€ (Not Verplanckâ€™s Point!).

To say the least, the September 1609 arrival of Henry Hudson on behalf of the Dutch East India Company, was the commencement of a very different experience for the Dutch, than it was for the indigenous people. The depictions of the event by artists in public spaces in the US are clearly from the European perspective. Through this series, over time, we are working to include a broader range of voices

More recent depictions of Hudsonâ€™s arrival, imitating the Weir format of the arrival under the gaze of the native population, is made in the 1940 Rhinebeck and Hyde Park Post Offices. Both were painted by Olin Dows, under the direction of President Roosevelt. 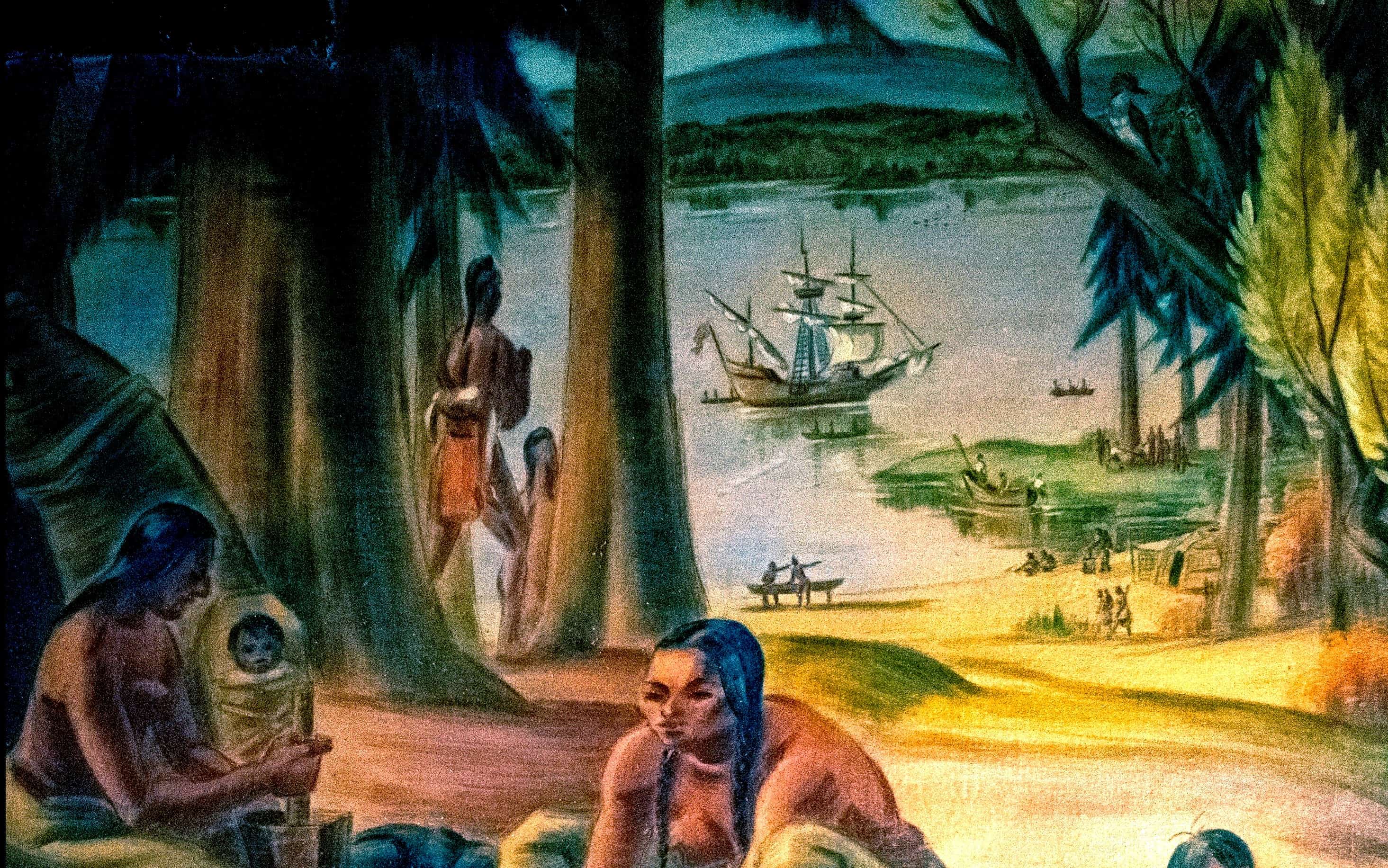 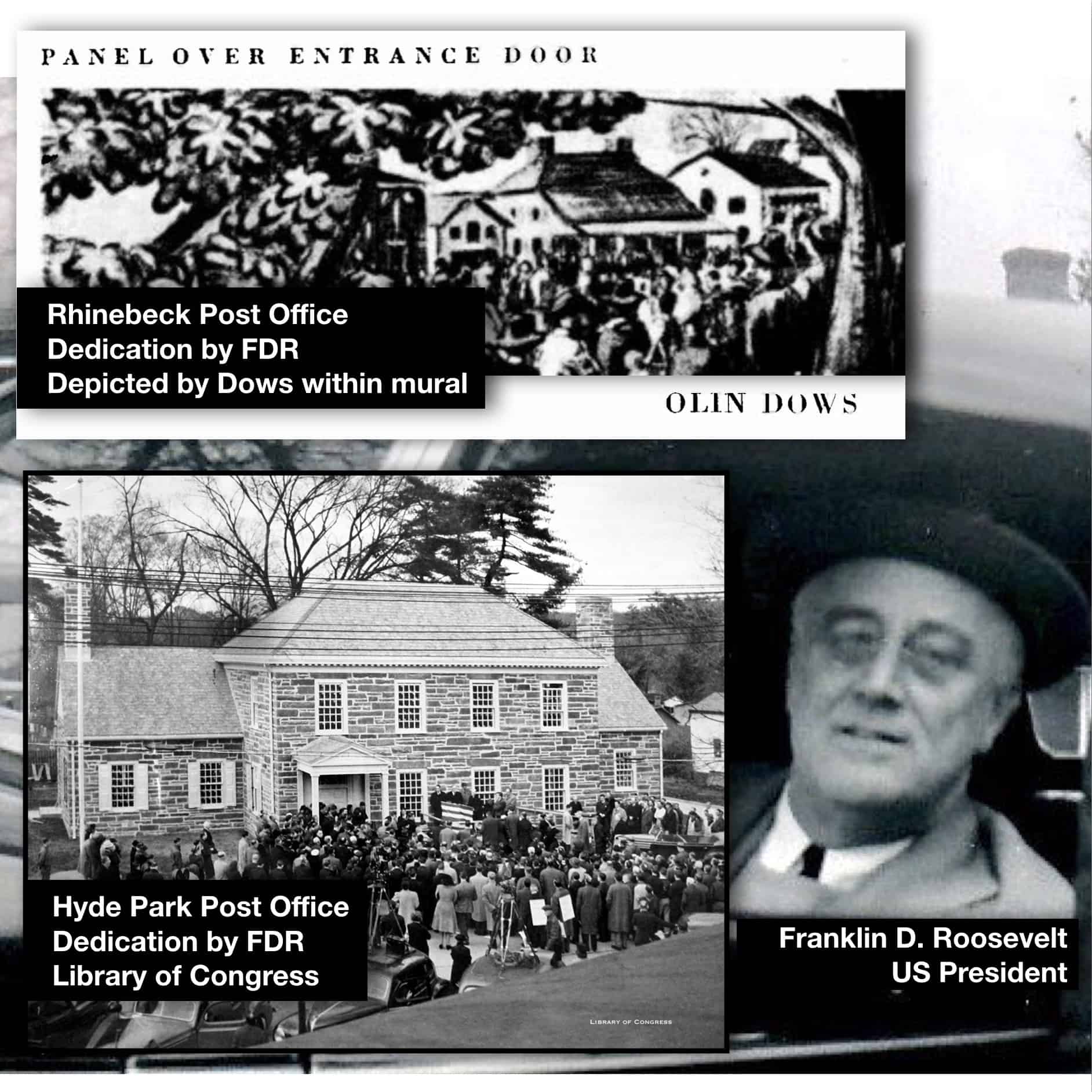 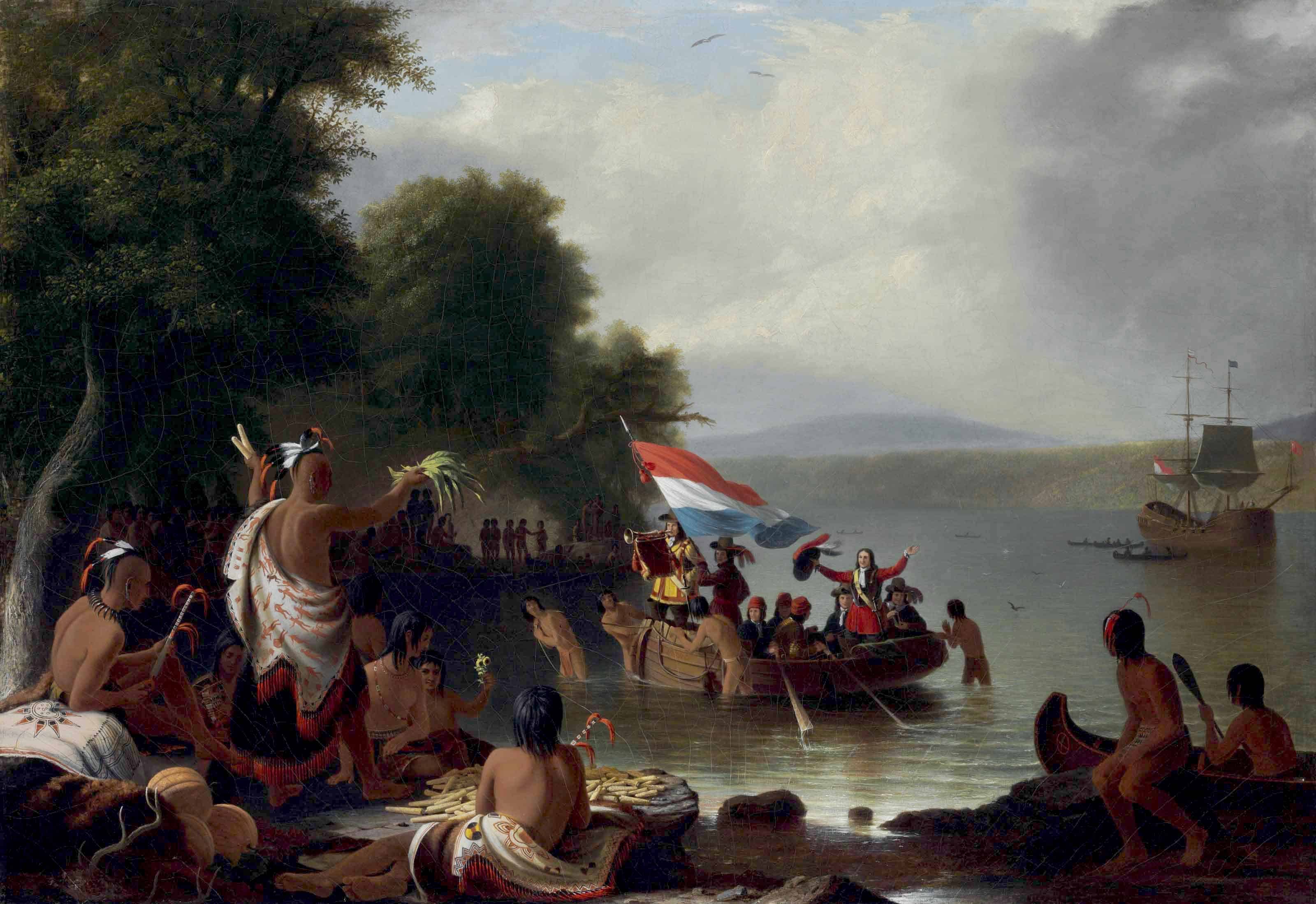 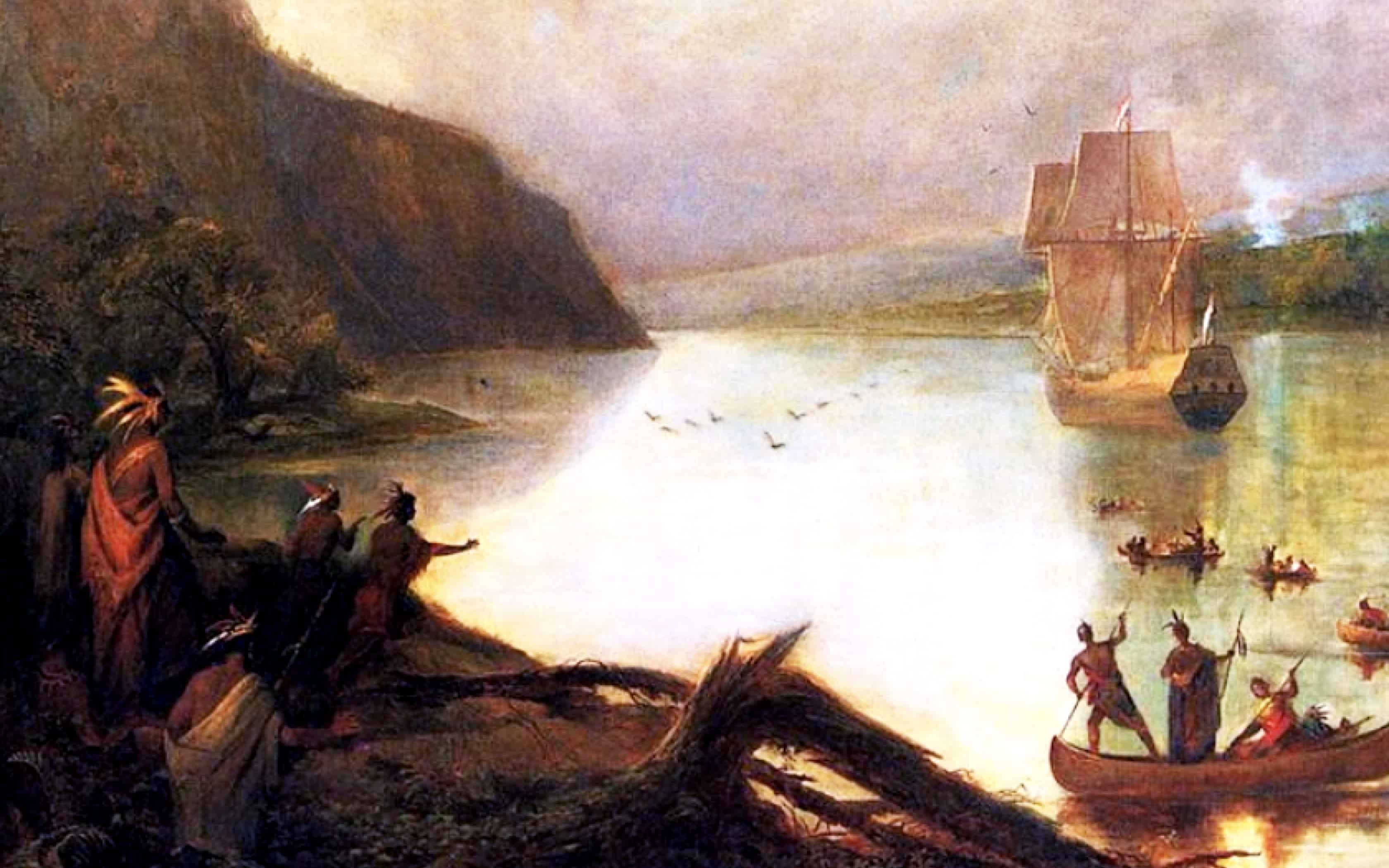