President Franklin D. Roosevelt was impressed by the murals that his Rhinebeck, artist neighbor, Olin Dows, had created for the Rhinebeck Post Office, and enlisted his talent for FDR’s own hometown Post Office in Hyde Park. Below left: Olin Dows wrote an explanatory text for the whole mural. Below right: FDR shown at dedication, November 6, 1940. Library of Congress.


Above: Courtesy of the Town of Hyde Park Historical Society 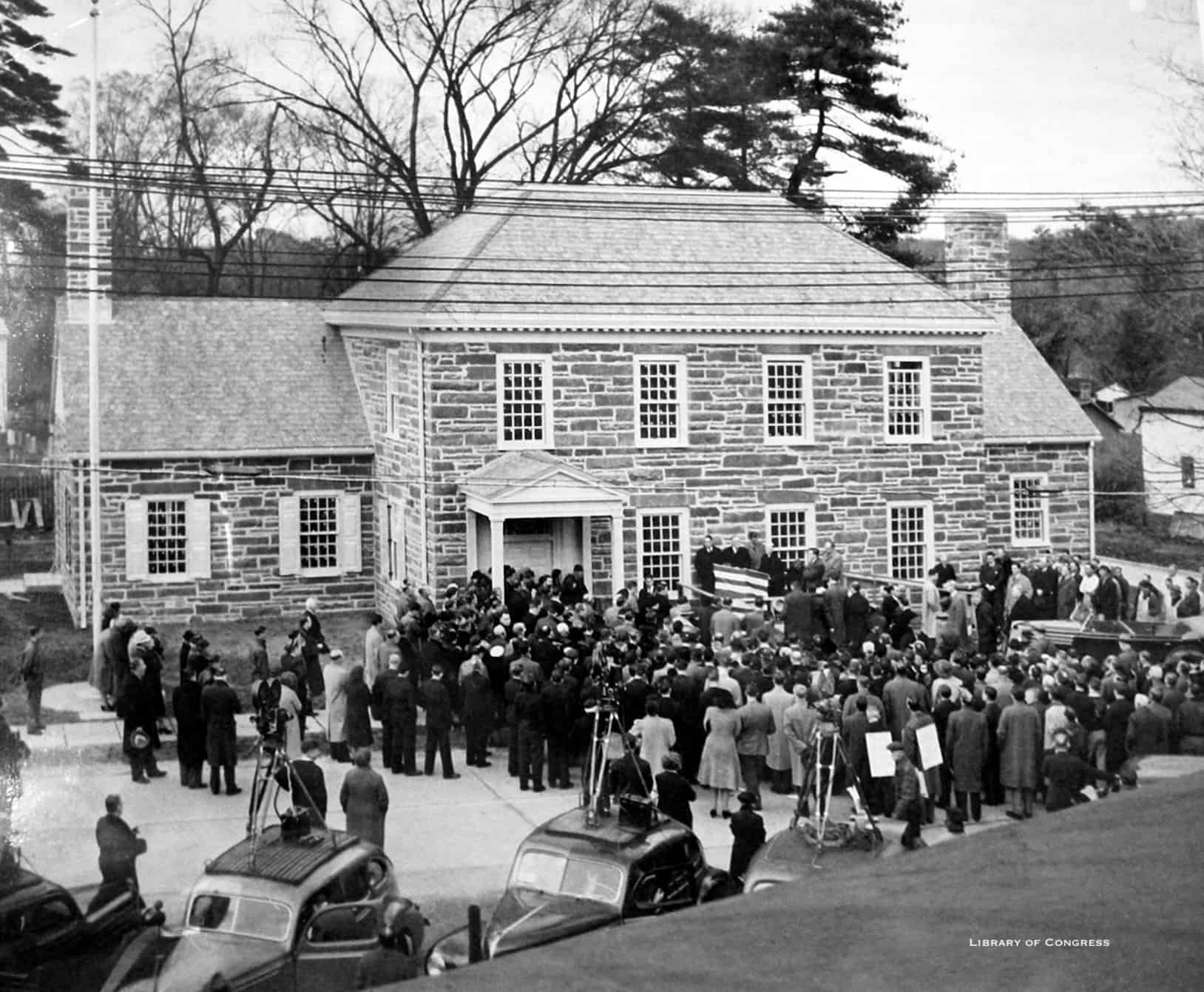 Depictions of Those Outside of the Mainstream Dutch and English Protestant 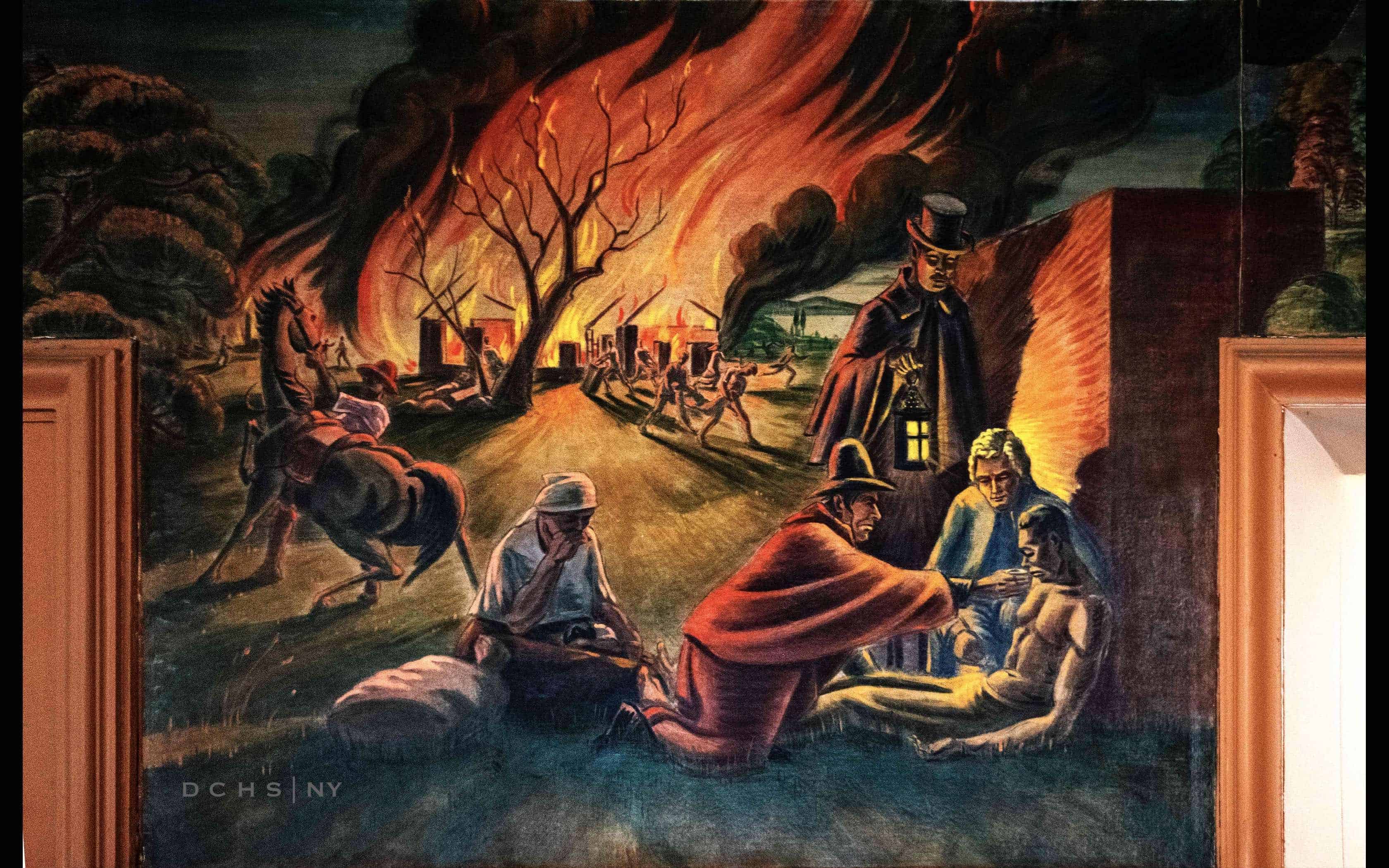 Hyde Park Post Office Mural Panel 8. “Dr. Samuel Bard gives first aid to a negro who has been burnt while his son William holds the lantern and his son-in-law John McVickar supports the wounded man. The latter was rector of St. James Church, the first professor of Political Philosophy (Economics) at Kings College (Columbia), and author of an interesting biography of his father-in-law.” In a manuscript prepared for a pamphlet on the murals in the Rhinebeck Post Office, Helen Myers notes that his fire took place in the winter of 1810-11, 12 years after Dr. Bard’s retirement from a successful career practicing medicine in New York. Myers also describes farmhouse fires as “common” before the days of volunteer fire departments. (Container 6, folder 6 of Olin Dows Papers in FDR Library). Mural commissioned for Hyde Park, NY post office by WPA Section of Fine Arts Art in Public Buildings Program, photographed by C.B. Ross and Edward Campeau 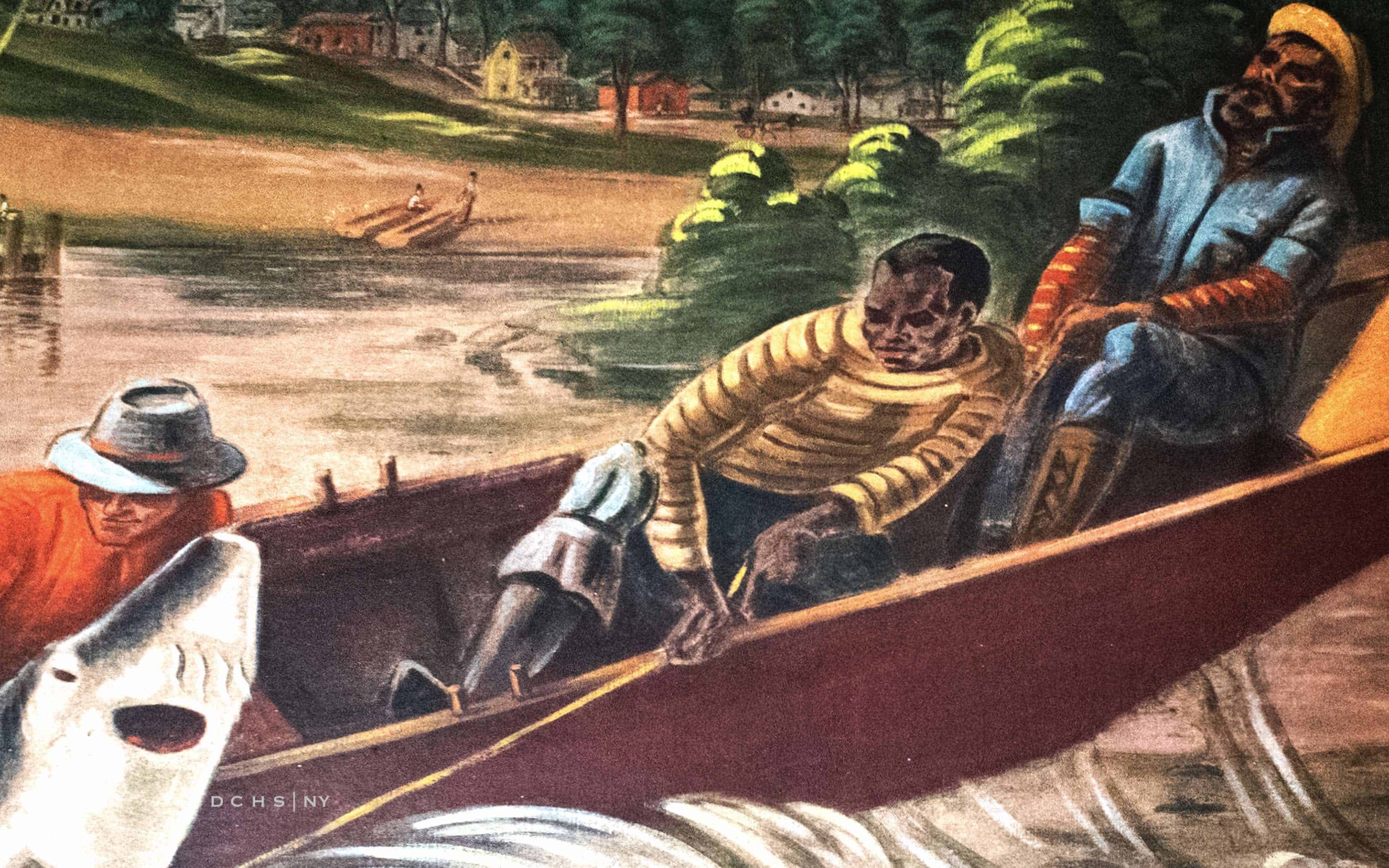 Hyde Park Post Office Mural Panel 15. “1870– William Meier (head of Hyde Park’s caviar industry) pulls up an oversized sturgeon helped by Abe Atkins [an African American veteran who had fought in the Civil War as a member of Co. G of the 20th Regiment of the New York Colored Troops, interred at the Hyde Park Union Cemetery] (drowned later when the [steamboat] Mary Powell capsized his boat). 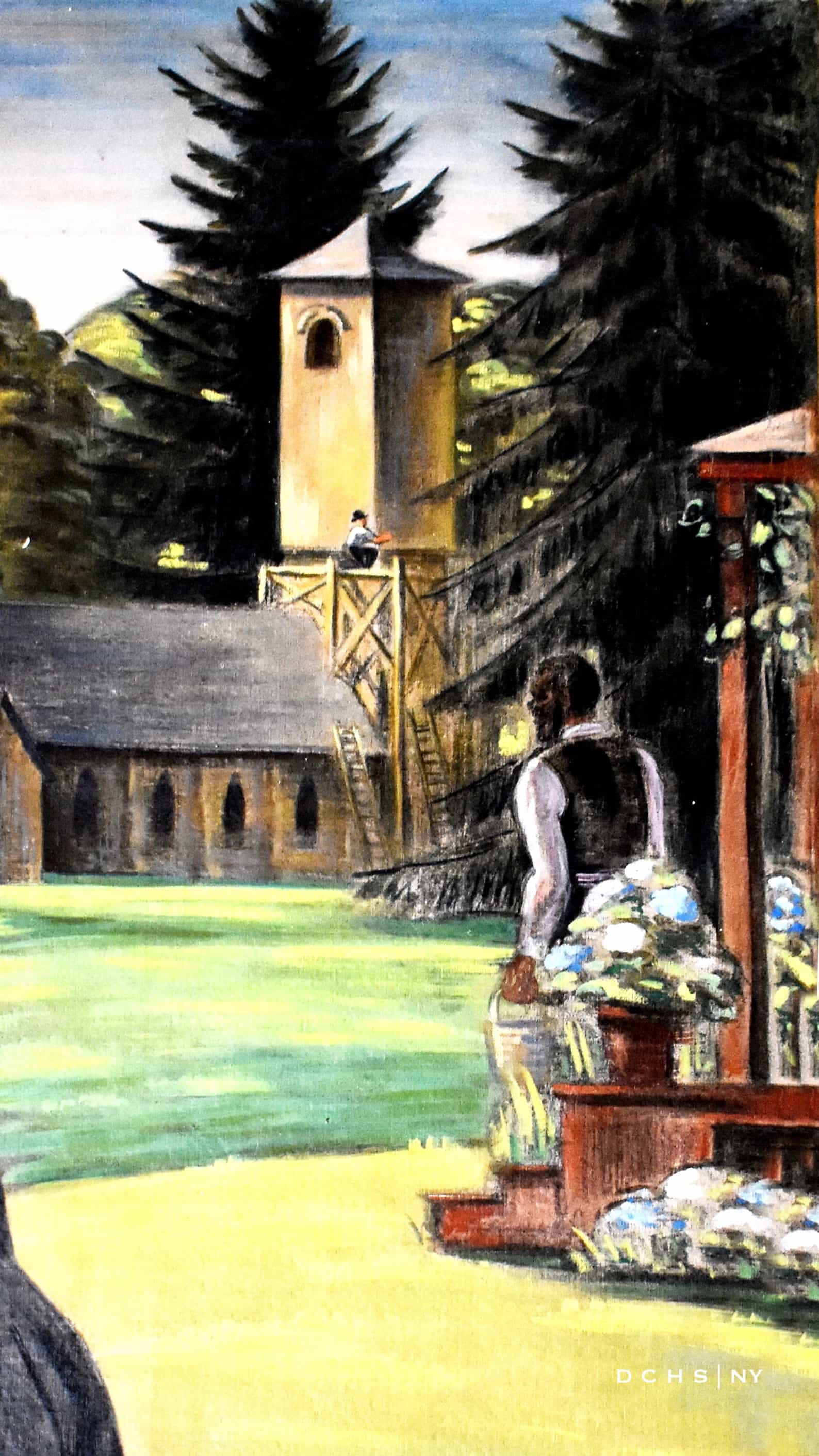 Hyde Park Post Office Mural Panel 12. From “Murals in the Hyde Park Post Office”: The Reverend Reuben Sherwood and two vestrymen, Archibald Rogers (grandfather of the Colonel in [panel 11] and Augustus Cowman discuss plans for St. James Church. Cowman (publisher of two papers in Poughkeepsie) went abroad to study church architecture in England and designed, supervised the building, and materially assisted in the financing of this church on his return. Sexton Richard Jenkins leaves the Rectory porch with a pot of Downing’s tastefully toned buff paint.” This panel was the subject of an animated correspondence between Olin Dows and Rudolph Stanley-Brown, architect of the Rhinebeck Post Office, who had “discovered an anachronism” in Dows’ decision to depict the workmen in the act of consulting a blue print as blue-printing “was discovered by a chap named Hershel in 1840 but as late as the 19th century architects still employed men to trace drawings to have more than one copy.” 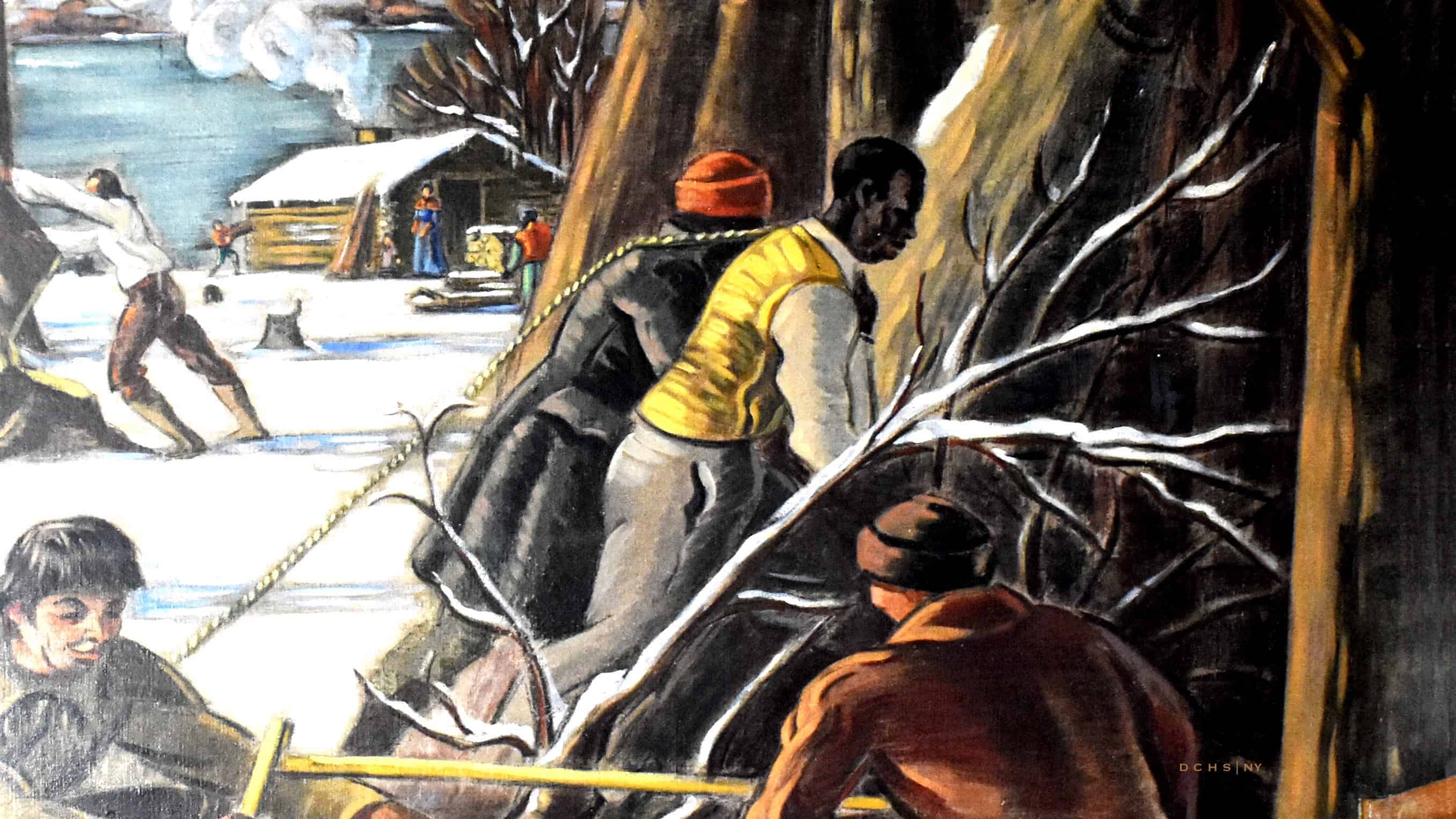 Panel 3 of Hyde Park Post Office Mural. From “Murals in the Hyde Park, New York Post Office”: “Before 1741. Jacobus Stoutenburgh, his sons and slaves clear the land. His log cabin, built 1723, was the first house in Hyde Park Village– The King’s Highway, then a grassy “waggon” road, passed in front– Jacobus and his wife Margaret Teller had eight children who varied in age, in 1741, from 23 year-old Tobias to 5 year-old Luke.”

Arrival of Hudson and the Half Moon in 1609

Right: Depiction in the Hyde Park Post Office of the 1609 arrival of Henry Hudson and the Half Moon.

Below: One of the most iconic depictions of the September 11, 1609 arrival of Henry Hudson and the Half Moon is by English painter, Edward Moran. It was one of thirteen paintings he did in a series on the history of landmark marine events in the history of the United States in 1892. The image came to be mass reproduced in the form of prints and postcards. As the 1909 Hudson Fulton Celebration approached, in 1908 the Society of Daughters of Holland, Dames of New York gave a stained glass window to the New-York Historical Society which was recently restored. In 1912, the Poughkeepsie Savings Bank on Market Street installed a window with the same subject. It was based on a photograph taken by Tracy Dows, the father of the murals painter, during the Hudson Fulton Celebration of 1909. 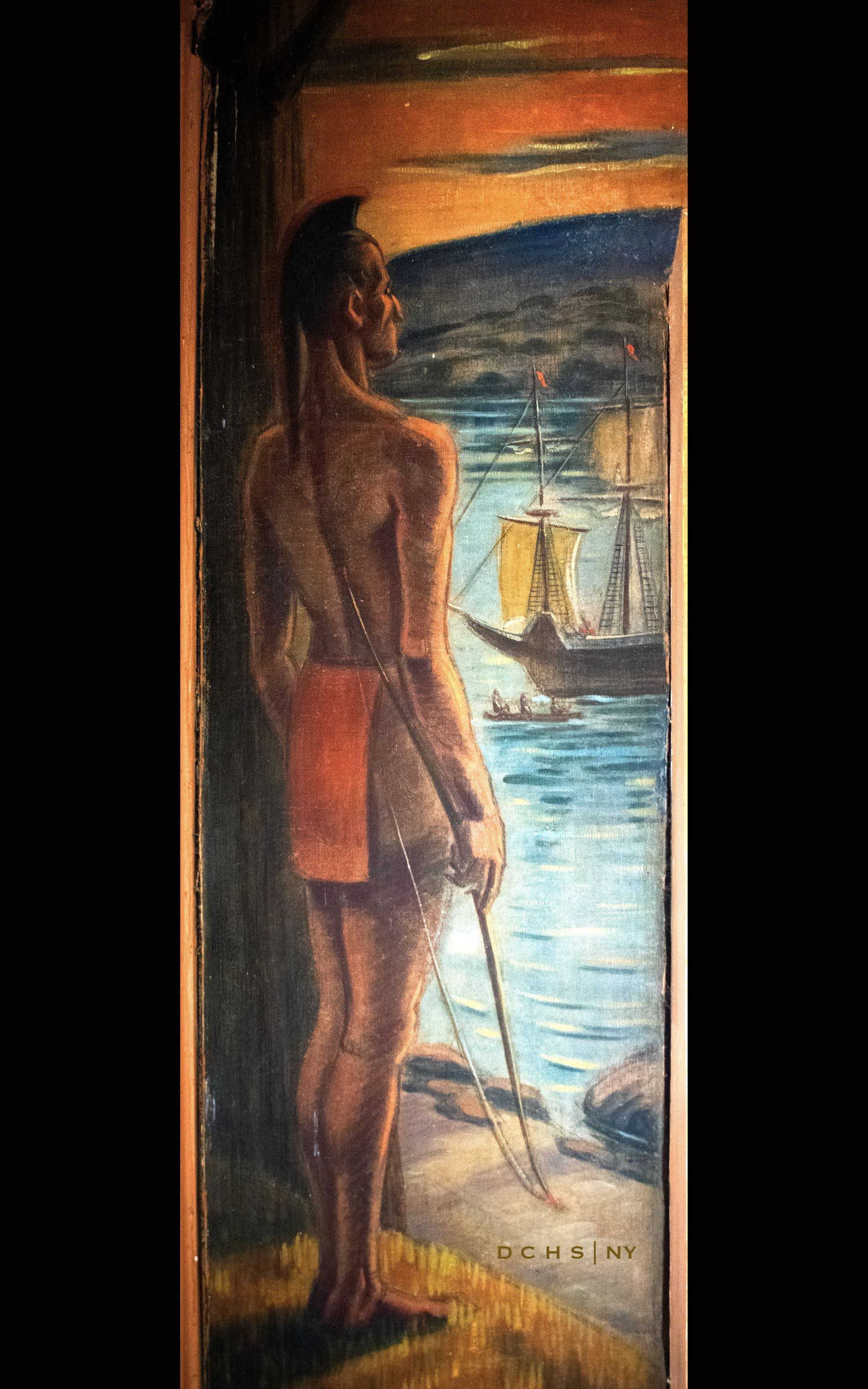