They came early in Milanâ€™s history, traveling up the South Road or Cold Spring Road from Stanfordville or lower down in Dutchess, the Oblong. These were the Quaker families of the Hicks, the Wilburs, the Niles and the Thorns who arrived here about 1777. Originally the Niles family was from Rhode Island as were the Wilburs. Both the Hicks family and the Thorns were from Long Island where they had fled from the bigotry of the Massachusetts Puritans.

Next to arrive were the families of David Carpenter, Gabriel Dusenbury, Nathaniel Mead, Maltiah and Macy Bowman, Samuel Haight, Obadiah Gifford, Edward Southwick and David and James Hoag. Being of the Quaker persuasion, traveling back down Cold Spring Road for Meetings was very troublesome and so they applied to the Stanford Monthly for a Meeting House of their own.

On the 28th of April in 1791 Nathaniel Niles, Benjamin Thorn, Nathaniel Mead purchased for five dollars from John Row a piece of land for the sole purpose of erecting a meeting house. As follows, â€œbeginning at or near a certain walnut sapling, thence west as the Cold Spring road runs four rods, thence South eight rods, thence east four rods to line of said Row, thence northerly to place of beginning.â€ A rod is 16 Â½ feet so the piece of land was 66 feet wide and 132 feet long, not bad for five dollars. This was the first meeting house. I donâ€™t know what occasioned the purchase of a second one in 1819, but the acreage was purchased by theÂ  members of the Stanford Monthly Meeting for the Milan Preparative Meeting. Richard and Phineas Carman sold an acre of land for four dollars and fifty cents. It was bounded â€œBeginning at the northeast corner thereof and running south twenty three degrees east four chains and fifty links to the north le of the arm belonging to the heirs of Benjamin Thorn, deceased, thence of said north line west eighty seven and a half degrees north two chains and ninety links to include a cherry tree from thence north seventeen and a quarter west four chains thence two chains and thirty links to the place of beginning, containing one acre and three rods of ground.â€ This plot of land was next to the Thorn Burying Ground, known as Quaker Ground. This was part of the farm of Richard and Phineas Carman which lay at the foot of Academy Hill Road. There was no Route 199 at this time. The road of Salisbury Turnpike split with the road coming from the south or as we know it Field Road. Field Road came north for about a mile at the four corners and then headed west into Red Hook, today known as Morehouse Lane.

Above: Use left/right arrows on hover to advance or reverse, location of Meeting House relative to contemporary Route 199. 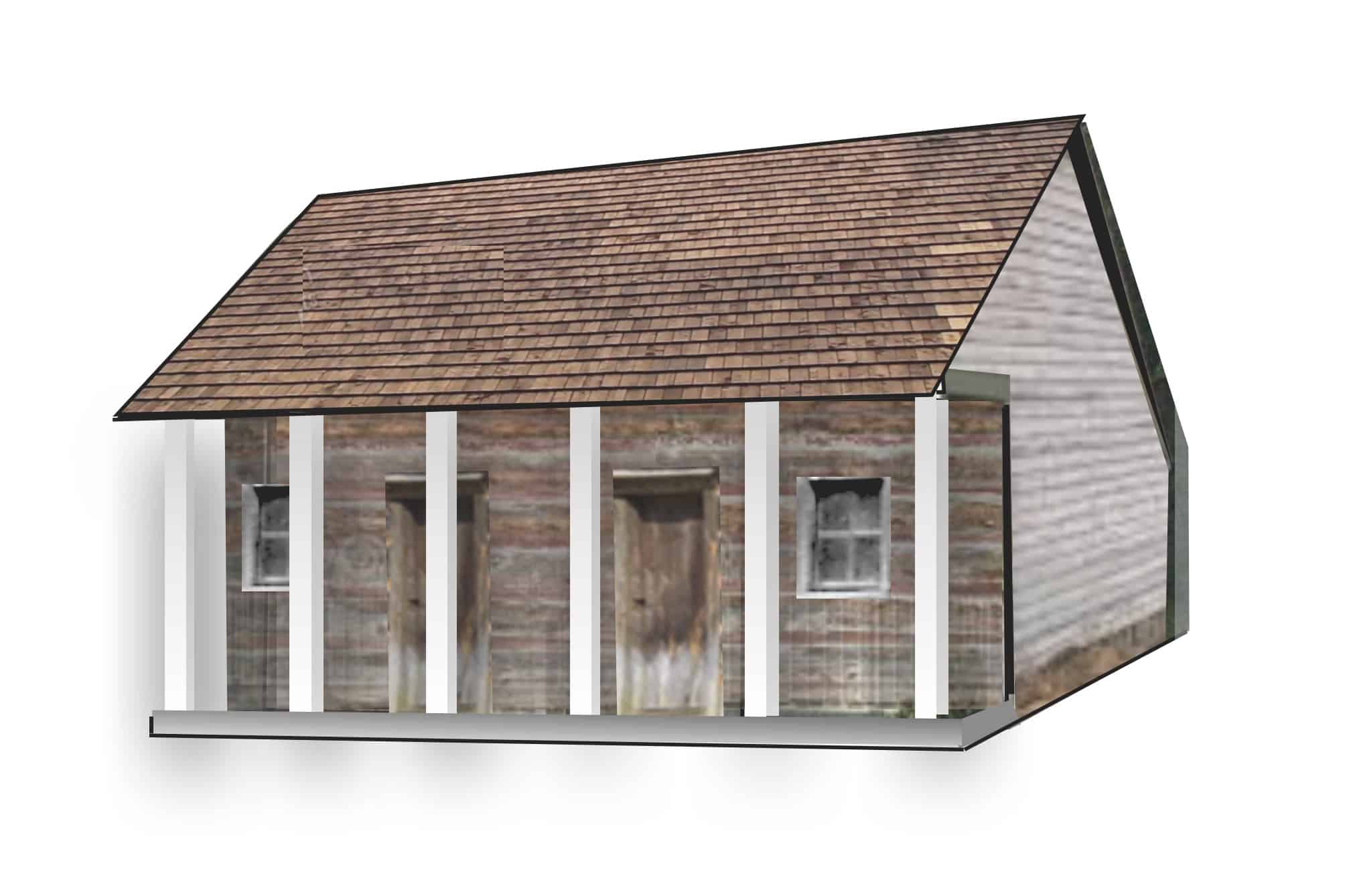 The influence of Benjamin Thornâ€™s house, which started out as a Long Island Salt box can be seen in the new Meeting house. There are no pictures of the church but in Del Uptonâ€™s book Quakers in Dutchess County, he gives a vivid description of the building. â€œA meeting house was built there. It had â€œhigh posts in front with a long roof extending nearly to the ground.â€ This salt box type structure was an oddity among Friends meeting houses which were almost invariably built in a symmetric style, whether one or two stories, and a porch on the front.â€ Well, I suppose you can say that the Town of Milan was an oddity. There was no village, only hamlets, stony hills and boggy vales and precious arable lands but it was there and people came.

Who were these Quakers and what were the like. Iâ€™ll start with the Thorn and Wilbur families because they were the earliest and most visible. 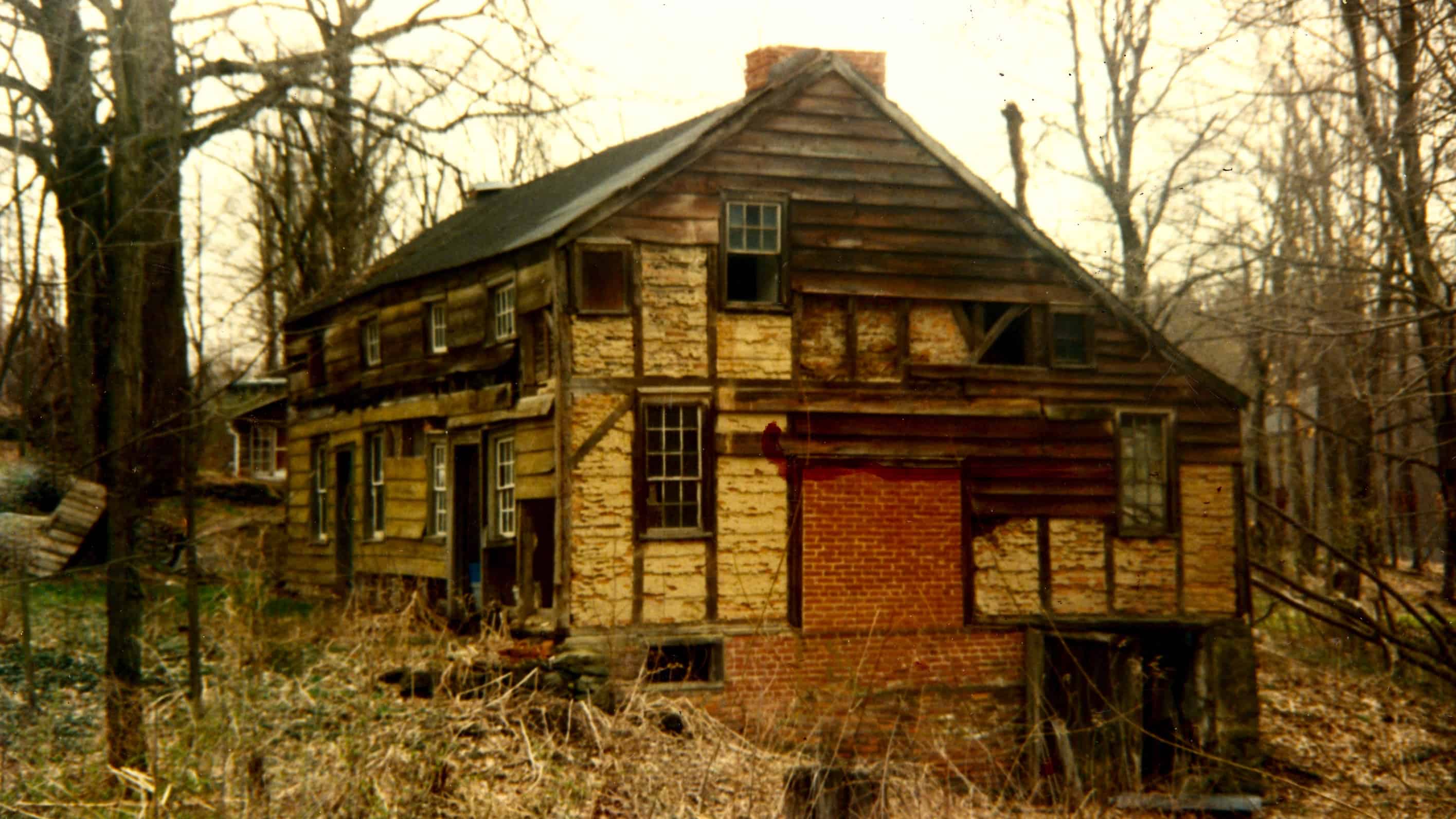 Benjamin Thorn was the sixth generation Thorn that came from England. His GG Great grandfather landed in Salem, Massachusetts, then went to Long Island and was one of the original patentees of Flushing. After a couple of generations that stayed in Queens, one came up to the Rombout Precinct and that is where Benjamin was born. When the Quaker movement began to go north, Benjamin went with them and came into Milan. He married Frances Estes in Fishkill about 1773 and came north four years later. Benjamin was instrumental in working with the Stanford Meeting to acquire land from John Row, a devout Methodist, and the building of the first meeting house. He built a small house at first in the hollow where the Salisbury Turnpike met with Field Road. As the years went by he and Frances had 12 children and the additions were actually stuck onto the back of the house. There is no land deed for him, but when he died he left at least three hundred and twenty acres to his son Stephen and Stephen gave 200 acres to his son Herrick. Stephen was the first postmaster for Milan and the first Supervisor of the Town.

Jephthah Wilbur came about 1787 at the time of his first sonâ€™s birth. He settled in a valley by the Fishwoods Road. There he built a grist mill and owned a blacksmith shop. He also owed 800 acres or the whole of Great lot 44. In 1822 he sold part of this Lot to Anthony Briggs which went to Timothy Briggs and then to John Ferris. Most of the acreage was good farm land for on the 1850 Census Henry Wilburâ€™s, son of Jephthah, farm value was $27,000. Jephthah had marred Elizabeth Mosher of Washington County in 1780.Â  Jephthahâ€™s parents Ezekiel Wilbur and Rachel Gifford were also listed in Washington County. They originally came from Bristol, Dorset County Rhode Island. A two story stone house was built to hold Jephthah and Elizabethâ€™s burgeoning family of fourteen children. There is no record of when Jephthah moved to Avon in Livingston County New York, but by 1828, his wife Elizabeth died in Avon. Jephthah lived there until he was 81 years and died 1 Sept 1843. Three of his sons, Stephen, Ephraim and Jephthah, Jr. were also n Avon and died in 1872, 1873, and 1871.

Some years ago, Clara Losse and I went down to the FDR Library looking for whatever we could find about Milan. The librarian brought out a calf bound volume of the Womanâ€™s Preparative Meeting 16 May 1800 to 13 April 1826. This was a minute book of the Little Nine Partners or women, a treasure of Quaker ladies names, relationships and in some cases, where the families went when the left Milan. TwoÂ  women were appointed to go to the Monthly Meeting almost every month of the year. I am not sure if they went to the Stanford, Creek or Nine Partners and am assuming their husbands or fathers went with them in horse and buggy for each of those Meetings entailed quite a distance to travel.

The names were familiar ones in Milan: Carman, Hick, Peckham, Hoag, Haviland, Case, Bowman, and Carpenter. And some not so familiar: Gritman, Gurney, Southwick, Tanner, Mead, and Quimby. Yet, all of these names are in the land deeds and with the exception of the Hickâ€™s families, mostly al of them are on Academy Hill Road, Field Road, Salisbury Turnpike and Lafayetteville. 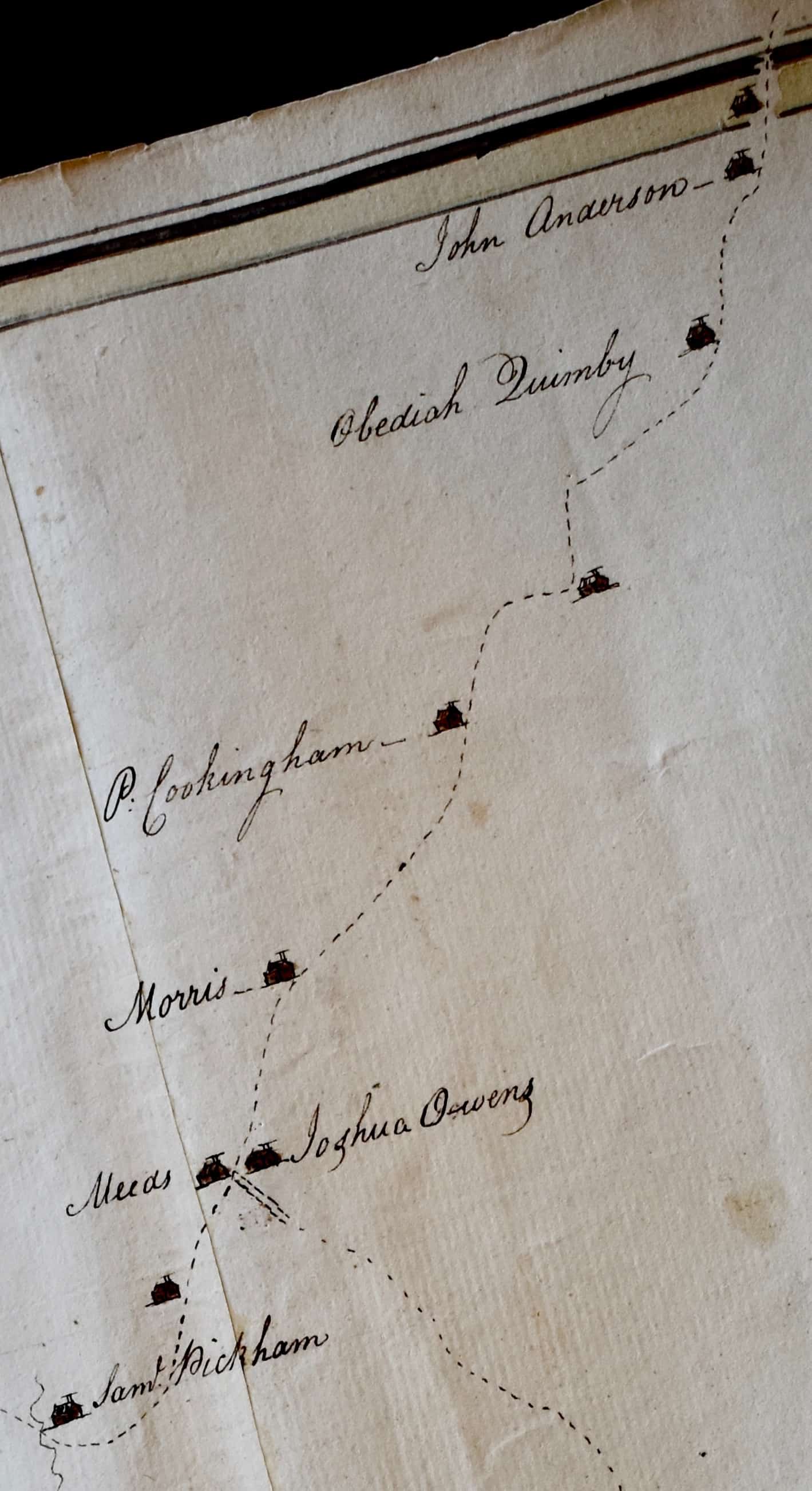 Above: The Quaker cemetery that was adjacent to the Meeting House remains. Any remaining stones were vandalized and destroyed in 2002, including the headstone of Milan’s first Town Supervisor, Judge Stephen Thorne. 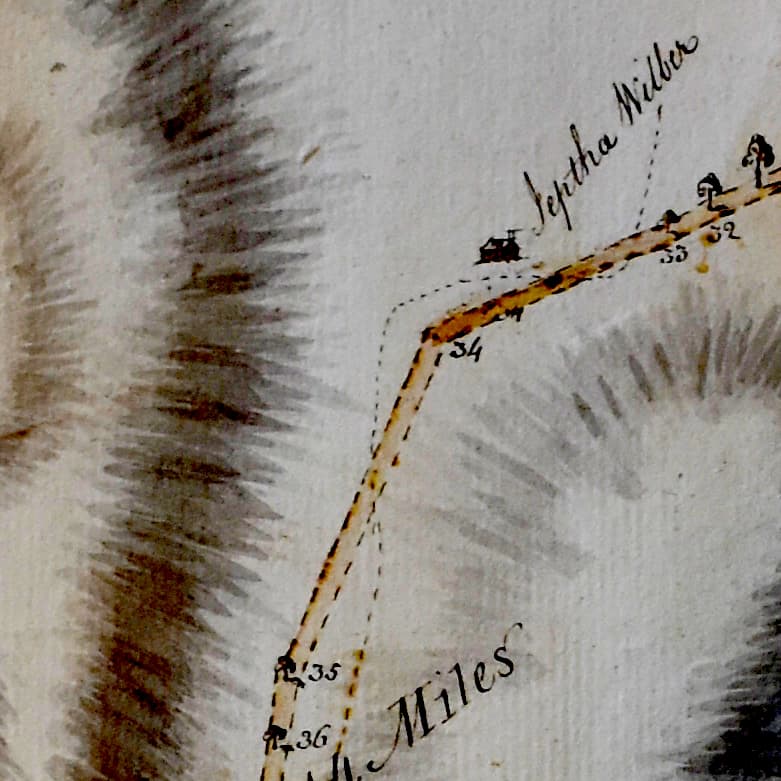 Above: The 1802 Salisbury Turnpike Map shows the location of the Wilbur family home.

Above: The story of Julia Wilbur, who was born in Milan and moved to the South to fight for women’s equality and abolition is the subject of a contemporary book.

One canâ€™t talk about people without wondering what kind of houses they occupied. We knowÂ  that Jephthah Wilbur built a two story stone house, similar to the one that Ephraim Case and Johannes Row lived in, all gone now. There were salt box houses like the one that Benjamin Thorn built, and there are two houses with a two door frontage still standing.Â  All were Quaker owned.

On Academy Hill Road near Jackson Corners is the house once owned by Walter and Helen Hermans with two front doors. Down further below Woody Row Road is the second one. In March of 1835, David J. Hoag and wife Mariah sold 108 acres to Peter Cookingham. Peter died prior to March 1838; his heirs sold the property to William Snyder. He held the remaining 83 acres for a year then sold it to William Carman, son of Phineas, and his wife, Thirza Haviland. They lived there until William died in 1868 and then Thirza sold it to Jephthah Cornelius. The house has two front doors. One opens into a hallway and the â€œfront parlorâ€ (rarely used); the other opens into the east room which had a Dutch oven and old fireplace. This was the main living area. The property is a long narrow piece. It runs about 64 chains north and south 16 chains at its widest point. It was probably built before 1835.

On Field Road there is an old salt box type building. Robert Martin purchased a â€œdwelling house and tract of landâ€ in 1787 from George Clinton of 156 acres. It is fairly certain that the main two rooms date back to that early house. Robert Thorn bought the place about 1832 and added another large room on the south side with a narrow steep flight of stairs leading to the upper story, just one roomâ€™s width. The stonework of the earliest foundation walls is much more skillful than found in the addition; a flat wall of face stones in comparison to the roughly laid field stones. The beams supporting the floor in the newer part of the house have been added, whereas the older beams are whole trees that have been flattened only on the upper sides. The 1787 deed has no mention of a road, but uses the eastern boundary of Lot 21 as the east line of the farm. On the 1832 deed, the whole eastern boundary of the farm is â€œalong the road running nearly north and south.â€

Many of the Quaker men and women left Milan after 1826, but more of them stayed. They were millers, farmers, carpenters, coopers and blacksmiths. They raised children, built their homes, but they didnâ€™t go the Little Nine Partners Meeting House. That part of their lives was over by 1830. The House stood empty and was finally taken down in 1895.