The bookends of the path to womenâ€™s right to vote are generally considered to be the 1848 Seneca Falls Convention with its â€œDeclaration of Sentiments,â€ and the August 1920 adoption of a US Constitutional Amendment granting womenâ€™s suffrage nationally. Within that period, while cities like Poughkeepsie had dedicated suffrage organizations like the Poughkeepsie Equal Suffrage League, rural areas were less likely to have them.

Three organizations supported the path to womenâ€™s right to vote in rural areas in Dutchess County; two did so overtly, and one did so indirectly. Equality evolved from starting points where society felt comfortable seeing women in active roles: as Christian believer and moral bulwark, as wife and mother, in this instance farmerâ€™s wife and mother, and as nurturer and healer in the form of a nurse. The respective, corresponding organizations were (or â€œareâ€ in that each is still active to varying degrees) the Womenâ€™s Christian Temperance Union or WCTU, the Grange movement, and the Red Cross. 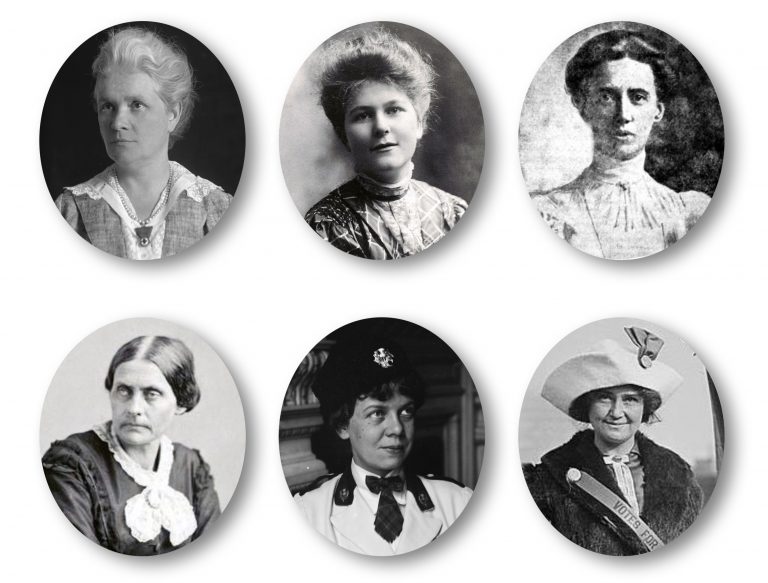 Top row shows Red Hook residents active in womenâ€™s suffrage: Mrs. Margaret Chanler Aldrich, in a photo c. 1920, is wearing a Red Cross pin she proudly wore throughout her life for important public occasions. For her Red Cross work in Puerto Rico during the Spanish American War she received a Congressional Medal, awarded personally by FDR in 1939. Christine Sayre Eno led the Red Hook Suffrage Workers in 1914 and 1915 as President. She was chairing committees of the League of Women Voters into the 1940s. Justine de Peyster Martin was elected in March 1919 as the county’s first woman Village President. At the same time Wilhelmina Freeborn ran and was elected to the Tivoli Village Board.

Bottom row shows Red Hook visitors: Susan B. Anthony spoke in 1879 to a small, but appreciative audience. Kathleen Burke spoke to a large picnic gathering of townspeople at Rokeby in 1916, Jessie Hardy Stubbs spoke locally and was a guest of Christine Eno in 1913. All photos courtesy of Library of Congress except: Eno, courtesy of Eno family. Martin, courtesy of New York Herald.

Let’s examine the Town of Red Hook as an example. Less has been found on the activities of the WCTU in Red Hook, which is the opposite of a town like Millbrook that had a dedicated WCTU building. Much more has been found on the Grange and Red Cross, which are the focus of this article as a result. Red Hook has the wonderful added dimension of the talent, ambition, deep conscience and unassuming humility of one of its oldest river estate family members, Mrs. Margaret Chanler Aldrich at Rokeby. She was an internationally active, long-time pro-suffrage advocate and Red Cross worker. Her involvement ranged from meeting with US Presidents, to traveling to Europe and Asia, to nursing in war zones, to attending, speaking, or hosting Red Hook Grange meetings. She was affectionately referred to as “Sister Chanler” among the local Grangers.

In December of 1912, the lack of a local suffrage movement was described by Mrs. Aldrich. She said, â€œIn a town like Red Hook it has been impossible to form a suffrage club because everybody is so busy with church societies, the Grange and social clubs, they could not endure the idea of another club. Almost everybody in Red Hook is a suffragist, anyway.â€ While the claim about the degree of suffrage support may be called an optimistic overstatement, the point she makes about existing social organizations is what we examine here.

Mrs. Aldrich was speaking upon the December 23, 1912 arrival of Rosalie Jones and a team of women who were marching from New York City to Albany. They were marching through the cold and snow with a suffrage message for the Governor. Greeted by a large group of residents and the Red Hook Village President, William Massonneau, against the backdrop of the whistle of the chocolate factory, a genuine and enthusiastic welcome was offered. The Red Hook Hotel was festooned in the colors of â€œVotes for Women.â€ The Tobacco Factory manager handed out cigars. The ladies spent the night in Upper Red Hook at the home of Mary Ham, wife of the Upper Red Hook postmaster and storekeeper, Alvin Ham. 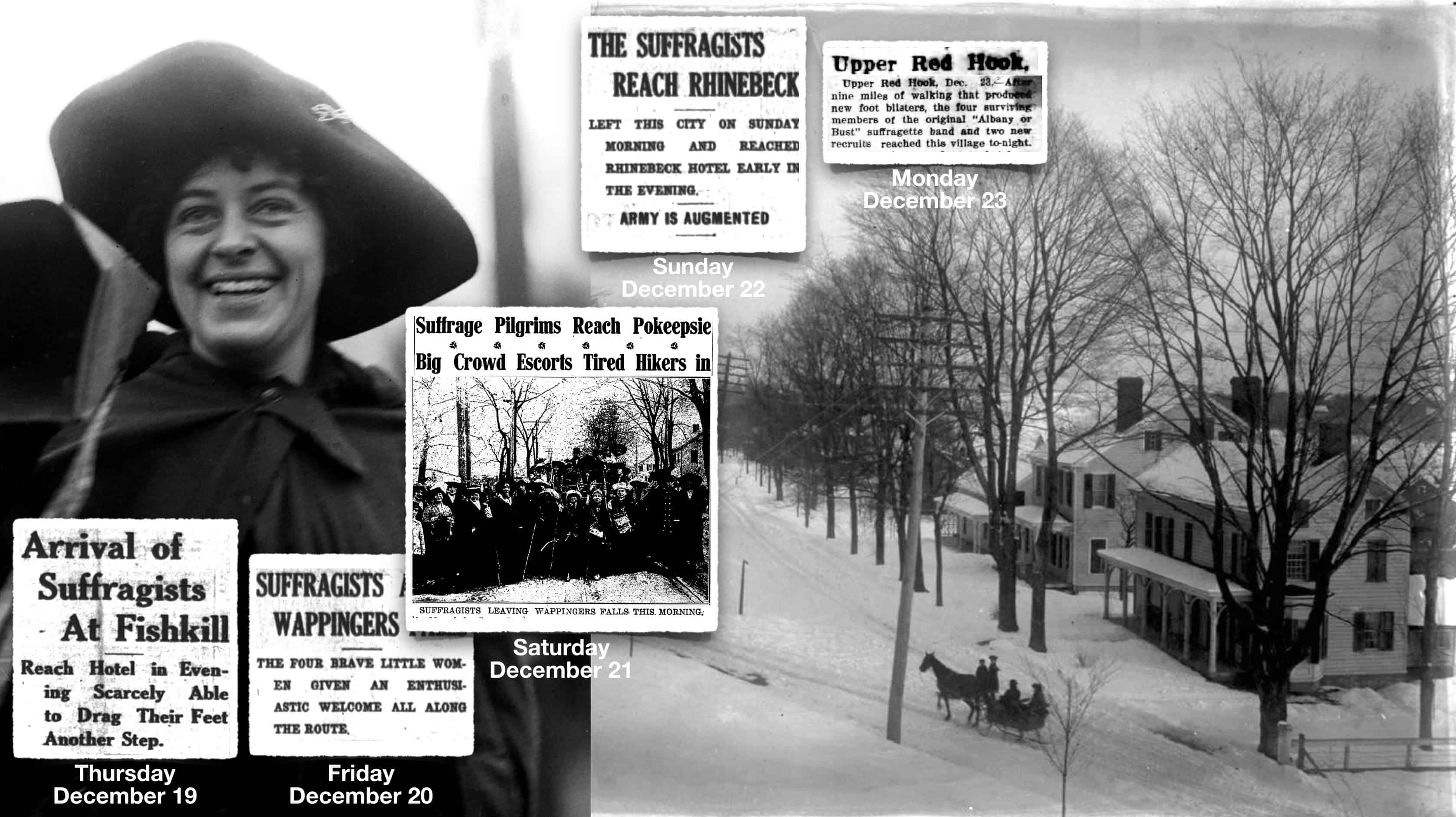 When “General” Rosalie Jones led a late December march from New York City to Albany to bring the Governor a message and demonstrate women’s “grit,” she and her team spent five nights in Dutchess County. Their last night in the countyÂ  in Upper Red Hook. Image of Upper Red Hook in the winter courtesy of Historic Red Hood.

The Grange formed after the Civil War to support the life of the farming family. From inception, the Grange put an equal emphasis on the participation of men and women. But its support of suffrage was uneven. The NY State Grange formally, publicly endorsed womenâ€™s suffrage in 1881, but far from unanimously. In 1912, the Dutchess County Pomona Grange formally voted a majority against endorsing womenâ€™s suffrage. No doubt with that vote in mind, in 1913 Mrs. Aldrich hosted a luncheon for â€œGrangersâ€ at Poughkeepsieâ€™s finest hotel, the Nelson House where she gave a talk. She then took a â€œstraw pollâ€ that yielded 75% support, not of womenâ€™s suffrage specifically, but of having a statewide referendum. Step by step, was the tide turning?

In February of 1914 the Red Hook Grange hosted a debate, â€œResolved: the women of Red Hook Grange favor equal suffrage.â€ While we donâ€™t know the outcome, one can imagine the debate was encouraged by the â€œproâ€ suffrage forces. By December 1916 the local Grange movement was formally endorsing womenâ€™s suffrage. By 1917, the NY State Grange said that words were not enough, Grangers needed to â€œtake aggressive action.â€

The Red Cross did not come out in support of Womenâ€™s Suffrage because they needed women on both sides of the issue for war efforts. But the scale and effectiveness of women emerging during World War One as leaders in the organization, and others similar to it, made it effective in advancing womenâ€™s suffrage, albeit indirectly.

One of those outstanding leaders was British-born Kathleen Burke. She created the Scottish Womenâ€™s Hospital which deployed 2,000 women and young girls during World War One. All women, they served in every conceivable role from battlefields to hospitals, from doctors to messengers. In the spring of 1916, she spoke at Rokeby to a large audience of locals, including parents and children, who were invited to a picnic that was a fundraiser to support a local, rural nurse.

Was there finally to be a Red Hook suffrage organization? In January of 1914 the Red Hook Suffrage Workers (RHSW) was organized and led by its President, Christine Sayre Eno. Enoâ€™s immediate next door neighbor, Miss Elizabeth Massonneau, acted as Secretary and Treasurer. She was the daughter of the Village President mentioned earlier, and part of the prominent family that established the important Tobacco Factory. Other women involved were the wife of the druggist, Mrs. Sewall Cann, and the daughter of a major building contractor, Mary Van de Bogart. Eno in particular attended suffrage-specific meetings statewide. In her home, in what is now the Burnett and White Funeral Home on S. Broadway, she hosted local RHSW meetings, and invited important national suffrage leaders, like Jessie Hardy Stubbs, to stay as overnight guests.

The RHSWâ€™s 1914 activities included featuring talks by nationally known suffrage leaders such as Frances Maule Bjorkman and Rose Winslow. They put on a performance of â€œMrs. Jarleyâ€™s Waxworksâ€ at the Lutheran Chapel as a fundraiser in support of the Red Hook Library.

It is not clear if the organization continued after the 1915 NY State referendum on womenâ€™s suffrage failed at a state, county, and Red Hook level. The 1917 referendum ended up differently, and successful statewide, in large part to womenâ€™s contributions in World War One which commenced for the US in April of 1917.

Although successful at a state level, the November 1917 referendum had a poor showing in Red Hook. 942 men voted. 48% voted against suffrage. 36% voted in favor. 16% left the answer blank. The two smallest of Red Hookâ€™s five election districts went marginally for suffrage: Barrytown, which included Rokeby, and Tivoli.

And so it was that womenâ€™s equality came to the Town of Red Hook, the way it came to many rural towns. Not overt or as a dedicated political movement. It came organically through the existing religious and social organizations, and worked out from the comfort zones established for women of Christian believer, wife and mother, and nurse. Red Hook was quick to embrace the other dimension of gaining suffrage when it March 1919 Justine de Peyster Martin and Wilhelmina Freeborn became the first women in the county elected to Village President and Village Board respectively.

Susan B. Anthony spoke New Yearâ€™s Day 1879 at the hall at Red Hookâ€™s Massonneau Building, still standing at the corner of South Broadway and East Market Street. Attendance was described as â€œengaged but smaller than expected.â€ You can listen to the first 20 minutes of the talk she gave that night in Red Hook, â€œWoman Wants Bread Not Ballots,â€ below.

While passing at a NY State level, the 1917 vote on the issue of women’s suffrage did not get majority support in Dutchess County or in the Town of Red Hook. Two of Red Hook’s election districts did have a small majority “yes.” They were the districts on the river. One was Barrytown, the location of Rokeby, and Mrs. Aldrich. The other was Tivoli, where Justine de Peyster and Wilhelmina Freeborn were elected t the Village Board in 1919. The largest election by a factor of two, the Village of Red Hook, home to Christine Sayre Eno and Elizabeth Massonneau, also leaders in suffrage as mentioned earlier, see a poor showing of support by any benchmark. 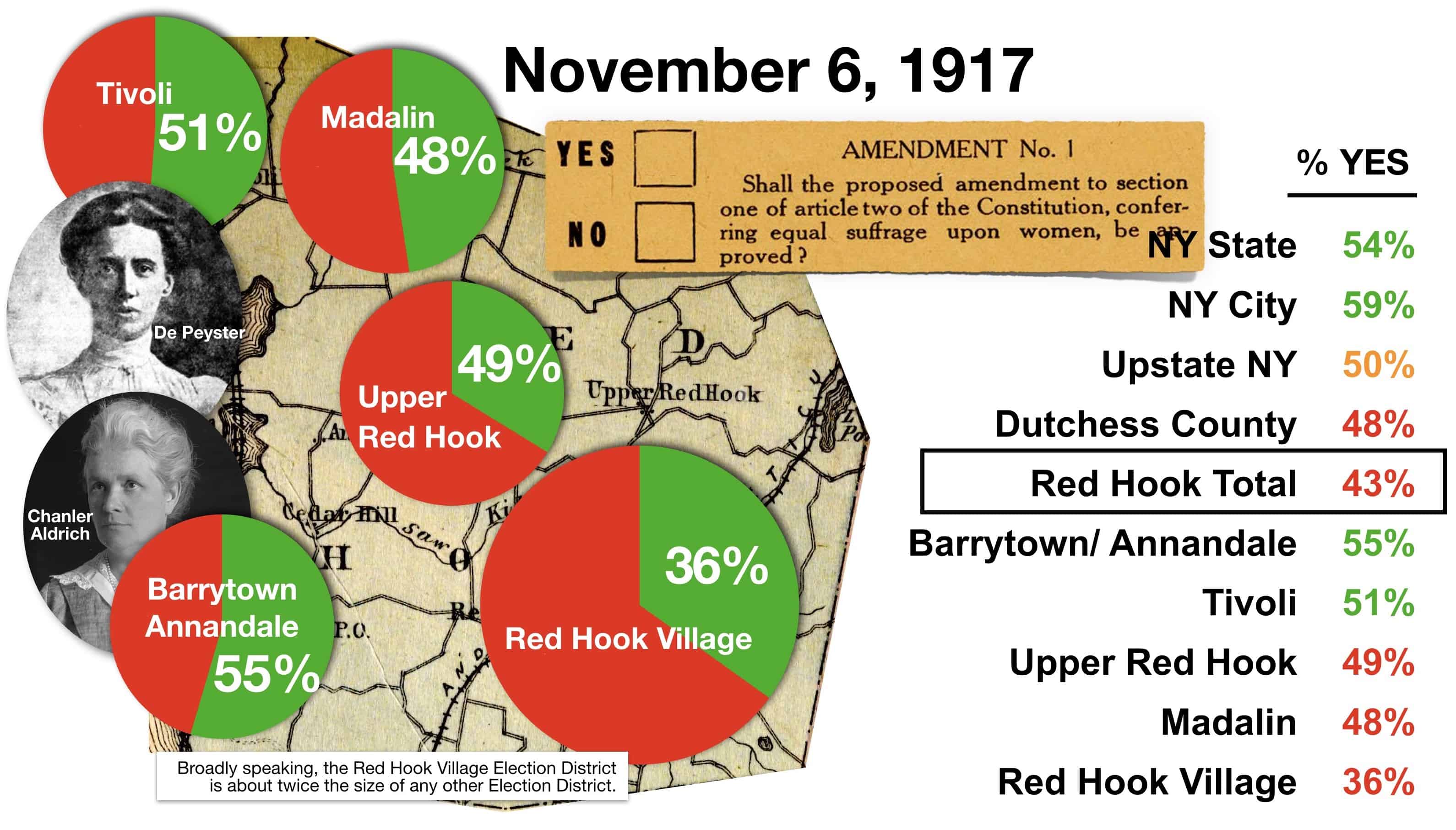