Skip to content
By Bill Jeffway.
A version of this article appeared in the April 21 edition of the Northern / Southern Dutchess News / Beacon Free Press.

The Poughkeepsie Baptist Minister, Charles Van Loon, had only been in the job just over a year when, in February of 1845, he did not mince words. The 27 year old minister had already achieved national fame in what was called the “Second Great Religious Awakening” (the first being in the 1700s). He embodied the hallmarks of this great movement that helped make the Methodists and Baptists the two largest religious denominations in the US at the time.

The hallmarks of the movement were evangelical fervor with many people converting and committing to a religious life on the spot at large gatherings; locally it meant passionate anti-slavery and abolitionist demands (Van Loon regularly spoke at rallies with Frederick Douglass); and it meant not just temperate or moderate use of intoxicating spirits, but a call for complete abstinence. 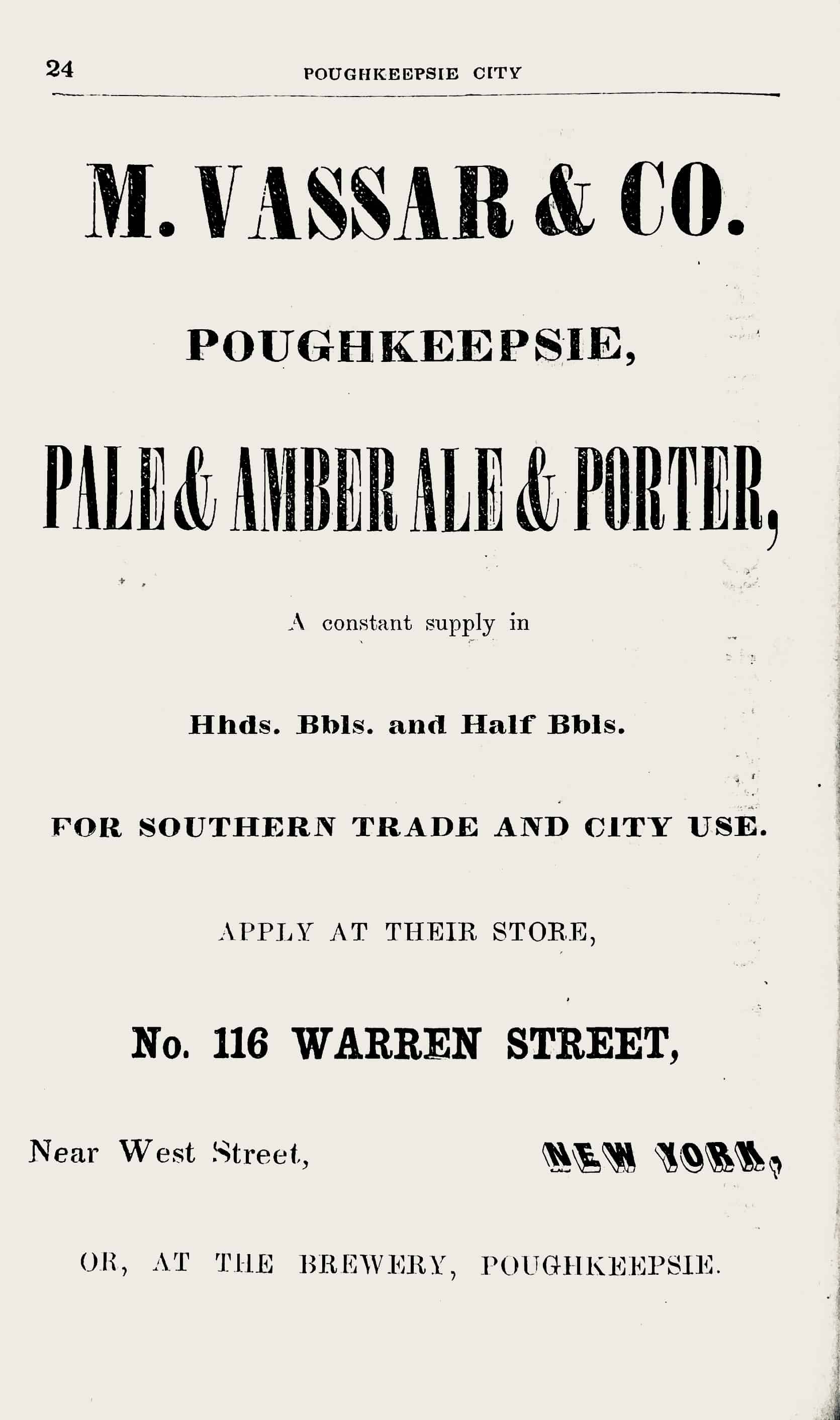 Who could possibly disagree with all this energy and fervor advanced in the name of moral values and God? Well…consider Matthew Vassar. In 1839, Matthew Vassar, who would build and endow Vassar College just over two decades later, advanced the $20,000 needed to build a Baptist church and parsonage on a plot of land he donated on what is today Lafayette Place. He did so on the condition that he would put up the full $20,000, deduct his $10,000 gift, and the congregation would pay off the $10,000 balance through a mortgage with interest paid to him. Vassar was both the giver of the mortgage, and its receiver or beneficiary as President of the Church board.

Above left to right: The entrance pillars remain, but the home of Matthew Vassar is today replaced with the Cunneen-Hackett Arts Center. The c. 1862 painting of the home by Frederick Rondel. An 1876 map showing how Matthew Vassar was subdividing the original land his father bought and used as the location of a brewery and private home. The entrance to the Baptist Church was just east of the home from Main Street.

Van Loon arrived as Minister in late 1843. One might wonder why the brewer Vassar would be involved in recruiting such a well-known temperance minister. After all, the family fortune was derived from the brewery that was started by Matthew’s father in 1806, greatly enlarged by Matthew, and came to involve Matthew’s brothers’ two children, who came to be immortalized through “Vassar Brothers Hospital.”

Van Loon suddenly found himself without a church building or a home. In what Van Loon described as immoral and a conflict of interest, Vassar “in his capacity as mortgagee foreclosed upon himself as trustee…and then directed the sheriff to levy upon the parsonage which is now advertised for sale.” It was in this way Van Loon found himself without a home or a church.

What was behind such a move by Vassar?

Vassar and Van Loon each accused the other of “starting it,” and “it” burned on the pages of newspapers for months. The Poughkeepsie Journal said they were reluctant to get involved in “paper wars,” but reprinted Van Loon’s attacks on Vassar which had been limited to an Albany abolitionist newspaper, out of “a concern for public education.” Having found the newspaper copies with the reprint flying off the shelves and not meeting demand, the Journal reprinted the article the following week (again, reluctantly, surely) but this time on the front page, and this time with a massive print overrun for sale.

Matthew Vassar lamented the “new tactics” of the Evangelical minister, excoriating Van Loon and describing the Evangelical process as misleading people, calling out the “pointed but misdirected zeal” and saying converts were “made the dupes of fanaticism and of folly.” According to Vassar ,Van Loon was making “Christians by machinery” and was “playing upon the nerves of his gathered hearers, like Paganini upon fiddle strings.”

Matthew Vassar lamented what he saw as bringing the political movement of abolition within the walls of the sacred church. “Political abolition walked through the lecture room of the chapel; political caucuses disgraced the house of God; a political meeting was held and a party abolition ticket for the county was nominated in the church. Fanaticism walked arm in arm with the pastor, who, leading on his raw recruits, commenced a war of extermination in the church.”

But the attack on Evangelicalism and abolitionist activities in church were merely acts one and two of a three act play. The third act, the culmination, was Vassar’s full-on accusation supported by a dozen sworn, notarized affidavits fully published in the newspapers, that Van Loon regularly broke his abstinence vow in front of him, and drank Vassar ale, not for medicinal reasons, but as a matter of course.

There had been a sober tradition of believing alcohol served medicinal purposes, and even temperate individuals could take alcohol for this reason. This is the same thinking that allowed the medical use of alcohol during national prohibition (1920 to 1933), where whisky and champagne were equally available for a medical doctor to prescribe. In principle, it underlies the distinction some see in the difference between marijuana for medical or for recreational use.

Matthew Vassar admitted that when Van Loon was dining at Matthew Vassar’s house, Matthew and his wife strongly lobbied for Van Loon to drink alcohol to treat his cold. Vassar claimed Van Loon not only took ale then, but had it subsequently at the brewery and at his house “when there was no pretense of any malady.”

Van Loon was quite capable of returning fire, and described Matthew Vassar’s suffocating grip on the church as “…degrading bondage, [creating] years of shameful impotence and moral disability. The pews were almost tenantless. The church and the brewery were married in the face of Israel in the Sun!”

Until his dying day Van Loon insisted he never had a drop. That day, for Van Loon, was sooner rather than later; he died two years after this wild exchange in November 1847 at the age of 29. 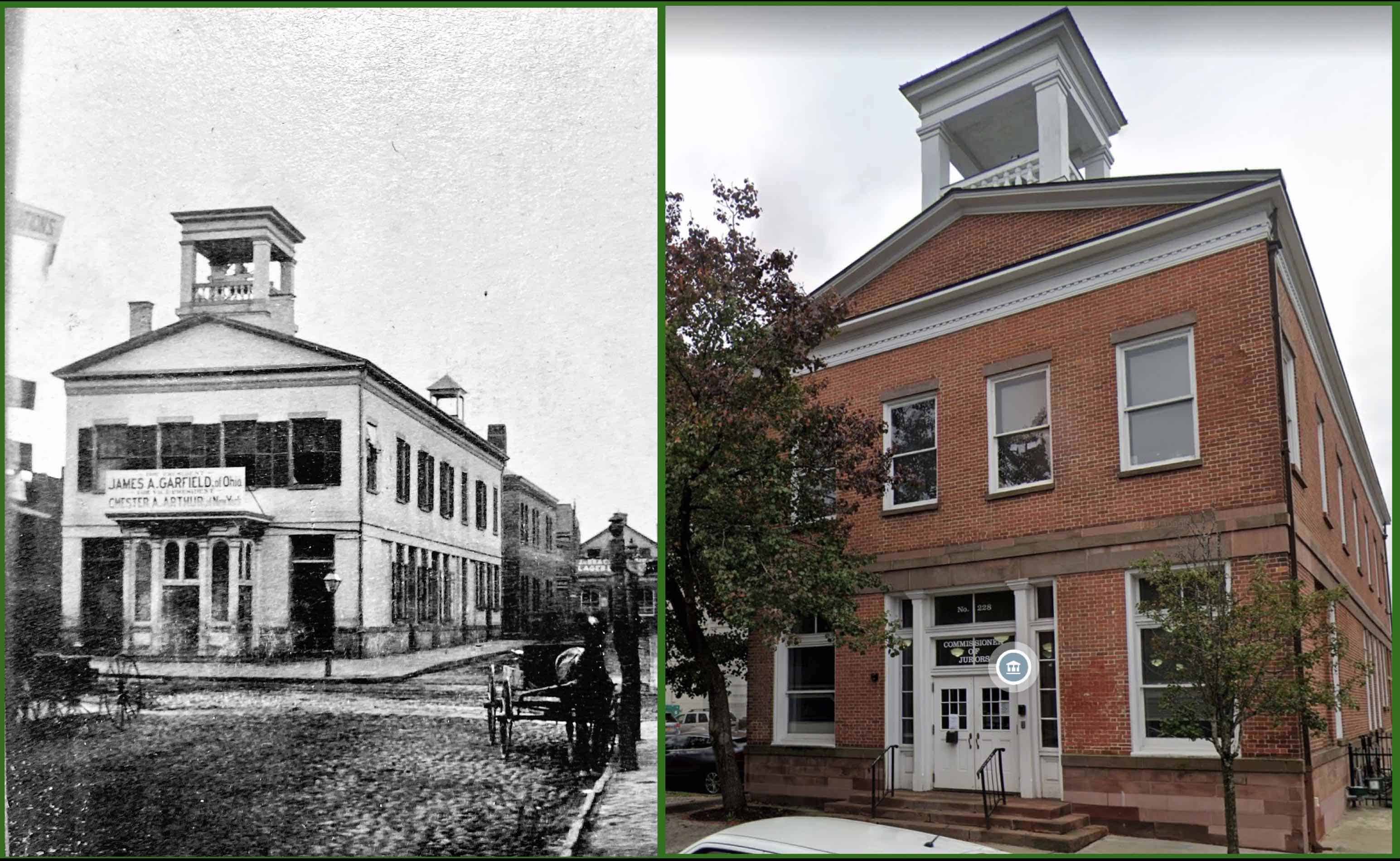 A split was inevitable, and surely to Van Loon’s great delight, when he asked his “flock” to stand up and leave the church, the majority of them followed him. The negotiating conference that came in to settle the split gave Van Loon’s Church the coveted name of First Baptist Church and Vassar’s Church Second Baptist Church. The smaller Vassar congregation actually renamed themselves the Central Baptist Church and remained on what is today Lafayette Place.

At Van Loon’s funeral at the First Baptist Church, the Presbyterian Minister said the following to an overflow crowd, not shying away from Van Loon’s battle with the giant Vassar, “It was on this account he threw himself into all the moral reforms of the day. In him, the downtrodden and the dumb of every complexion found a friend and an advocate. It was nothing to him that the rich and the polished turn the cold shoulder to these celestial enterprises. It was enough for him that they were owned and blessed of God and contemplated the redemption of suffering man from oppression and from crime.”

Frederick Douglas lamented his death, crediting Van Loon’s leadership in causing the great split that created the northern and southern Baptist conventions and churches, a prelude to the Civil War.

In July of 1867, the two congregations merged back into one, just short of a year before Matthew Vassar’s death in June 1868. They did so under the name of the First Baptist Church, which remains the name of the congregation to this day. The large brick church at the corner of Mill Street and Market Street that is today Changepoint Church, was built in 1879 for the united congregation. The First Baptist Church today is located on South Cherry Street. 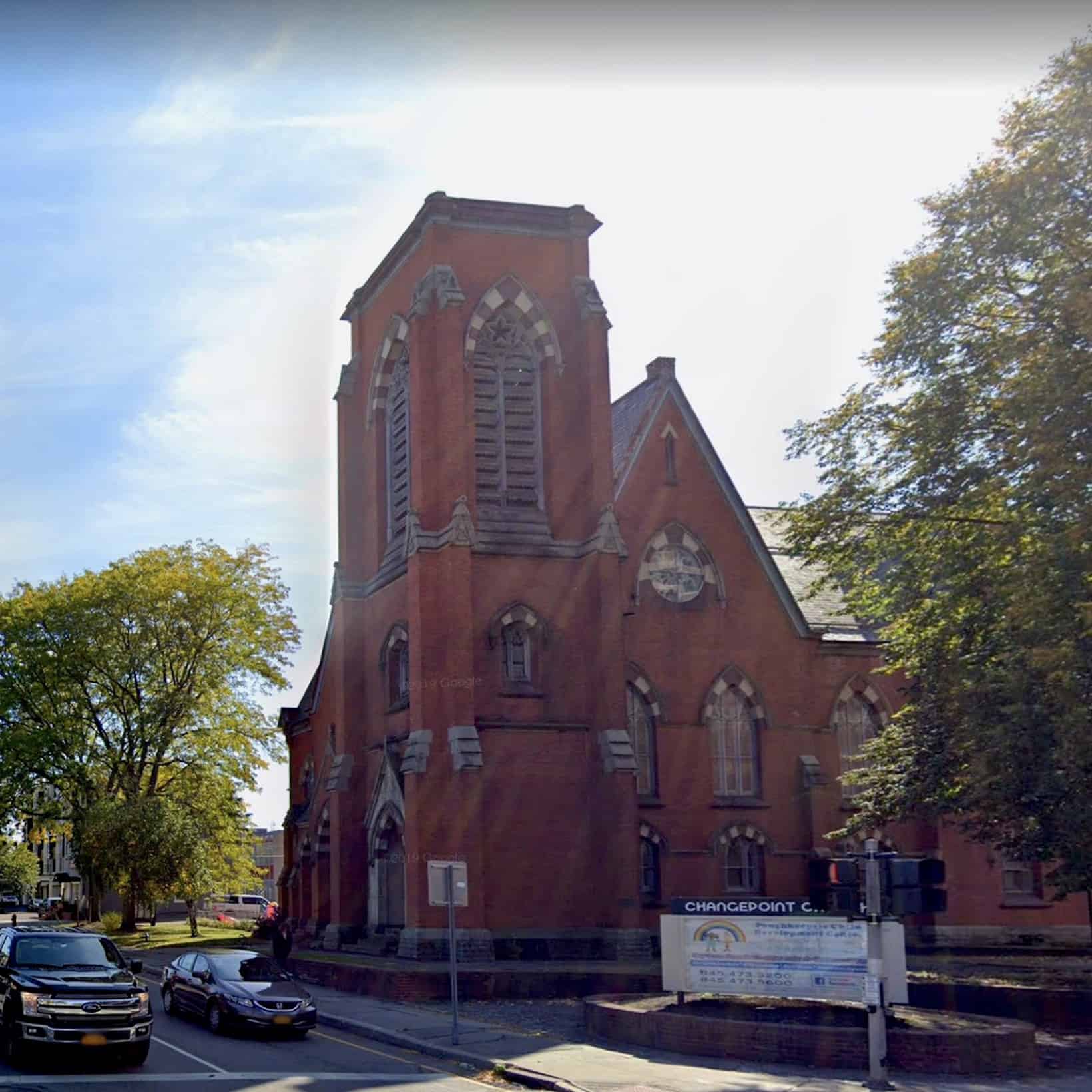 In 1879, twelve years after reuniting into one Baptist congregation again, the Baptists built the church building that today is Changepoint.

Posted in Decoding Dutchess Past, Poughkeepsie